I worked at Sooner plant about a month during the summer of 1979 before I heard about the Indian curse that had been placed on the plant before they started construction.  It came up by chance in a conversation with Sonny Karcher and Jerry Mitchell when we were on our way to the coalyard to do something.  I was curious why Unit 1 was almost complete but Unit 2 still had over a year left before it was finished even though they both looked pretty much identical.  When I asked them that question I didn’t expect the answer that I received, and I definitely wasn’t expecting to hear about an Indian Curse.  It did explain, however, that when we drove around by Unit 2 Sonny would tense up a little looking up at the boiler structure as if he expected to see something.

The edge of the plant property is adjacent to the Otoe Missouria Indian Tribe.  It was said that for some reason the tribe didn’t take too kindly to having a huge power plant larger than the nearby town of Red Rock taking up their view of the sunrise (at least until the tax revenue started rolling in from the plant building the best school in the state at the time).  So it was believed that someone in the Indian tribe decided to place a curse on the plant that would cause major destruction.  I heard others say that the plant was built on Holy Indian Burial ground.  At the time it seemed to me that this was a rumor that could easily be started and very hard to prove false.  Though, if it was true, then it would seem like the burial site would most likely be located around the bottom of Unit 2 boiler (right at the spot where I imagined the boiler ghost creeping out to grab Bob Lillibridge 4 years later).

I am including an aerial picture of the immediate plant grounds below to help visualize what Jerry and Sonny showed me next. 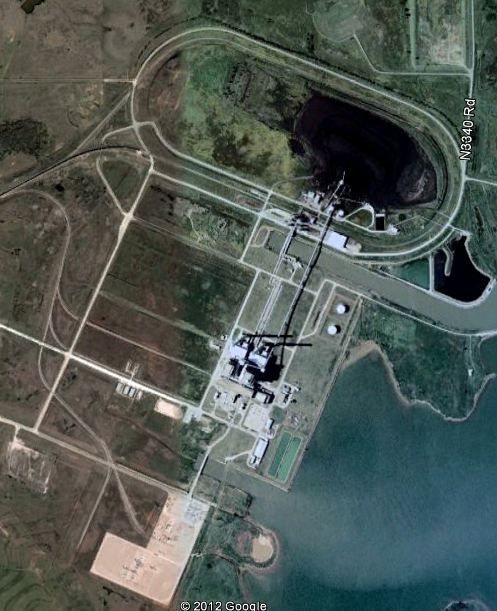 This is a Google Earth Image taken from their website of the power plant.  In this picture you can see the two tall structures; Unit 1 on the right with Unit 2 sitting right next to it just like the two boilers that you see in the picture of the plant to the right of this post.  They are each 250 feet tall.  About the same height as a 25 story building.  Notice that next to Unit 2 there is a wide space of fields with nothing there.  The coalyard at the top is extended the same distance but the coal is only on the side where the two units are.  This is because in the future 4 more units were planned to be built in this space.  Sooner Lake was sized to handle all 6 units when it was built.  But that is another story.

At the time of this story the area next to Unit 2 between those two roads you see going across the field was not a field full of flowers and rabbits and birds as it is today.  It was packed full of huge metal I-Beams and all sorts of metal structures that had been twisted and bent as if some giant had visited the plant during the night and was trying to tie them all into pretzels.

Sonny explained while Jerry drove the truck around the piles of iron debris that one day in 1976 (I think it was) when it was very windy as it naturally is in this part of Oklahoma, in the middle of the day the construction company Brown and Root called off work because it was too windy.  Everyone had made their way to the construction parking lot when all of the sudden Unit 2 boiler collapsed just like one of the twin towers.  It came smashing down to the ground.  Leaving huge thick metal beams twisted and bent like they were nothing more than licorice sticks.  Amazingly no one was killed because everyone had just left the boilers and were a safe distance from the disaster.

Needless to say this shook people up and those that had heard of an Indian Curse started to think twice about it.  Brown and Root of course had to pay for the disaster, which cost them dearly.  They hauled the pile of mess off to one side and began to rebuild Unit 2 from the ground up.  This time with their inspectors double checking the torque (or tightness) of every major bolt.

This brings to mind the question…  If a 250 foot tall boiler falls in the prairie and no one is injured… Does it make a sound?

In the years that followed, Sooner Plant took steps to maintain a good relationship with the Otoe Missouria tribe.  Raymond Lee Butler a Native American from the Otoe Missouria tribe and a machinist at the plant was elected chief of their tribe (or chairman as they call it now).  But that (as I have said before) is another story.