Power Plant Welders need a large stock of specialized Welding Rods.  Mechanics need all sizes of wrenches, files, hones and calibers.  Electricians need a good pair of side cutters, strippers, red, yellow, orange and blue wire nuts, butt splices and Electrical tape.  Instrument and Controls need all kinds of transmitters, converters, pressure gauges, and PLCs.  The one thing Every True Power Plant Man needed was a Stainless Steel, highly decorated, colorful and sturdy Belt buckle.  A couple of post ago I talked about the machinist that were around in the beginning when I first arrived at the plant.  I mentioned that any True Power Plant Machinist could create just about any part needed at the plant.  One such piece of quality craftsmanship was the Oval Belt Buckle:

A plain example of an oval belt buckle

You see, When you take a Stainless Steal Pipe and you cut it at an angle, the resulting shape is an oval just right to make a belt buckle: 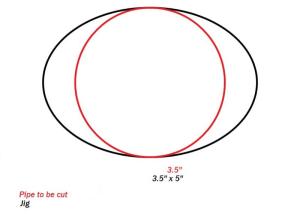 During those first couple of years when the machinists were correcting mistakes made by the manufacturers of all types of motors, pumps and fans, between jobs, a machinist had a little down time when they could let their lathes, mills, bandsaws and drills cool off some.  It was during this time that the creativity of the machinists were revealed to the rest of the Power Plant Men.  In those early days, even more than their hard hat stickers, the Belt Buckle was the status symbol of any Power Plant Man driving a pickup truck with a gun rack in the back window.  Making the belt buckle in very high demand at the plant.

Power Plant men were on the lookout for any kind of colored stone or odd shaped piece of metal that could be used to adorn their own specially machined belt buckle supplied by the Power Plant Machine Shop.  Stainless Steel Nuts and small pieces of pipe were machined down to make ornamental designs to fit in the center of belt buckle.  Copper pieces could be used to add color along with the colorful stones found lying about in the pasture.

The Machinist would carefully mill the pieces down to just the right thickness.  The stainless steel oval cut from the pipe was carefully milled to give the proper curve to make the belt buckle just the right shape.  Different types of epoxy was used as filler to hold everything in place.  Even “Jewelers Rouge” was used to polish the belt buckle until it shined like silver and the stones as if they had been placed in a tumbler to give them the perfect smooth surface.

A block of Jewelers Rouge used for polishing Jewelry

I remember the day when Sonny Karcher asked me if I wanted to have my very own specially designed belt buckle.  At the time I was not knowledgeable enough to realize the great treasure that was being offered to me for free.  I just looked down at my skinny waist (it’s a wonder I can remember that many inches ago) and thought that it wouldn’t be easy to swing a Weed Wacker with a big oval belt buckle scraping across my abdomen, so I politely declined.  If I had known better, I would have agreed, and taken my prize home to hang on the wall as memento of my early power plant days.

At the time there were a lot of things about the power plant men that I didn’t fully appreciate until years later.  For instance,  their generosity.  They were always looking out for each other and if they found a bargain somewhere, they let everyone else in on it.  That was one way you could tell a True Power Plant Man from the imitation wannabee’s.

During the first summer Ray Butler came up to me and said that a guy was selling 100 pound sacks of potatoes, and was wondering if I would go in on it with him, since he really only wanted 50 pounds.  If I did, he would let me keep the gunny sack.  I believe the 50 pounds of potatoes cost about $15.  My mom had to figure out about 15 different ways to make potatoes, because we ate potatoes until they were growing out of our ears… (oh wait, that’s what you do when you don’t wash your ears properly).  Anyway, before we were done with that bag of potatoes my dad and possibly even my brother and I were eating them raw like turnips as the Potato Gun hadn’t been invented yet. 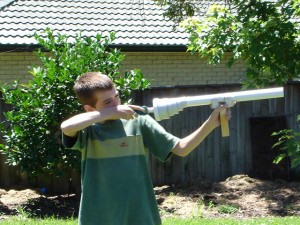 Another time a peach orchard just up the road toward Marland Oklahoma was letting you go and pick your own peaches and buy them by the box full for a real good price, so after work, we all headed over to the peach orchard where the man that owned the orchard would drive you around the orchard in a trailer to where the ripe peaches were so that you could go around and pick all the peaches you wanted to take home.

In those early days, people could bring different types of produce and vegetables and other types of food products from their farms and sell them to their fellow power plant men for a good discount.  That is, until the evil plant manager realized that it was taking money out of the Canteen Fund, which he felt was his own responsibility to make sure the coffers of the Canteen were always kept overflowing.  — Until one year when they were going to show enough profit to have to pay taxes…

Anyway.  The Canteen fund was used to purchase turkeys for the workers at Thanksgiving.  One year when the fund didn’t have enough money to buy turkeys, the men at the power plant bailed the hay in the pastures that surrounded the north end of the lake, and sold the bails to pay for the turkeys.  Then when Corporate Headquarters got wind of it, they insisted that the hay belonged to the Electric Company, and therefore could not be used to buy turkeys for the workers of just that one plant that had used their own money to fill the money box at the plant.  And that was the end of the free turkeys for Thanksgiving.  Kind of took the “Thanks” out of the giving…  Needless to say, the hay wasn’t bailed much after that, it was just brush hogged like a right-of-way.  I’m sure there is a Turkey out there somewhere that is grateful to Corporate Headquarters, but it isn’t the kind of mindless Turkey that cared more about messing with someone’s morale than about the efficiency of a Power Plant.  It was amazing how much of a morale booster a free turkey can be.  Just think about it.  Here were Top Power Plant hands at the time making close to $20 an hour or $160 a day who went home with a big grin on their face just like Bob Cratchit when Ebenezer Scrooge gave him the Giant Goose for Christmas, so they could hear their own children say, “God Bless Us, every one!”

The Scrooge from Corporate Headquarters or was he?

Although, the truth be known, it was found out a few years later that the evil plant manager used the excuse that “It Came Down From Corporate Headquarters” often to make unpopular policies at our plant, where Corporate Headquarters was not aware that their good and friendly nature was being tarnished by a rogue plant manager in some distant Power Plant Land far far away up north in the wastelands of Oklahoma.

Anyway, I sometimes wonder how many power plant men that were around in the first days before both units went live still have one or more of those quality built belt buckles made exclusively by Power Plant Machinists for Power Plant Men.  If so, they ought to take them down from the fireplace mantle or remove it from the glass case and dust it off and bring it to work some day just to show the New Generation X Power Plant newbies (or pups as we used to call them) what it was like living in the Power Plant Kingdom back when the great towering stacks were being raised, and the boilers were being built like skyscrapers out in the middle of the countryside.

Then they can gather them around by the boiler and open one of the small hatchways so that the orange glow of the fireball inside can illuminate the grating and the eager faces of the young power plant men waiting to hear the stories of brave men long ago who were rewarded with free turkeys at Thanksgiving.  They can recall how proud they were to take the Free Turkeys home to their families all waiting eagerly by the window to watch as their father braved the Oklahoma west wind and dust storms to find his way to their door.  Greeting them with hugs and the proud acknowledgement of how much the Electric Company appreciated their father enough to give his family one free turkey every year.  Can you hear it?  Is that my son by the fireplace?  Did he just say what I thought he said?  Yes.  It was.  He said, “God Bless Us, Every One!”