Three of the four years that I was a summer help working at the Coal-Fired Power Plant, I worked out of the garage.  Not only were we responsible for mowing the grass and cleaning up the park areas around the lake, we were also the Automotive Garage.  That is, we changed the oil and other fluids, charged dead truck batteries and washed the pickup trucks that were used at the plant and various other truck related jobs.  We also Fixed Flat Tires.

Something had happened the first summer when I worked out of the garage that greatly impacted the need for us to fix flats fast and furious.  It was a disease that was rapidly killing dogs in Oklahoma during the summer of 1980.  It was known as the Canine Parvovirus.  We had a puppy at home named Oreo that died that summer from this disease.  By the time the dog showed the symptoms of the disease, it was just about too late to save the life of the dog.  This leads me to introduce you to Doug House  (No, not Dog House.  I know you were thinking that because I had just mentioned the Parvovirus killing dogs and you may have thought I misspelled Dog).

It was Doug House that taught me the fine art of “Fixin’ Flats”.  Doug House and Preston Jenkins had been hired because of their automotive skills more so than their Power Plant Man Prowess.  Doug House was a few years older than my dad and his son was about the age of my younger brother.  He was from Louisiana.  He didn’t have a Cajun accent or anything like that (or maybe he did and I just didn’t know it).  He sounded like an interesting mix between Winnie The Pooh and Frosty The Snowman (if you can imagine that).  So, those power plant men that remember Doug, listen to these two voices and think of Doug (and I don’t mean Jimmy Durante who is singing the Frosty the Snowman song.  I mean the guy that asks “What’s a lamp post?”): 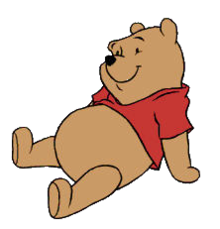 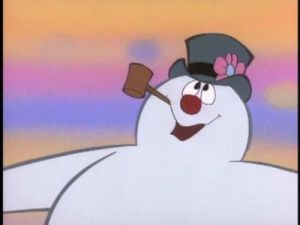 The Power Plant was still under construction when I started working in the garage (my second summer) and this meant that there were plenty of nails, screws welding rods and other pieces of shrapnel strewn over the roadways, giving ample opportunity for flat tires.  We would often come into work in the morning to find one of the operators’ trucks that had developed a flat tire during the night shift parked in front of the garage waiting patiently for the flat to be fixed.

It seemed like the garage was filled with all the latest equipment for automotive maintenance, however, the flat fixing tools were mostly manual.  We did have air powered tools so that we could quickly remove the lug nuts from the tire.  From there we would add air to the flat tire so that it was pressurized enough to find the leak.  Then we would put it in a half barrel trough full of soapy water to see if we could see the air leaking, blowing soap bubbles.  Once the leak was found and marked with a yellow paint pen, the wheel was placed on a special stand that was used to remove the tire from the rim called a “Tire Dismounter”. 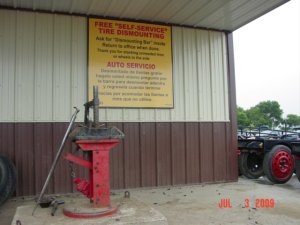 The stand used to remove the tire from the wheel

So, I became a Flat Fixin’ Fool.  And during the three summers that I worked repairing flats, I became pretty fast.  I loved fixing flat tires.  We used patches the first two years instead of plugs, which means that we fixed the flat from the inside of the tire by placing a patch over the hole inside the tire using special patches and rubber cement. 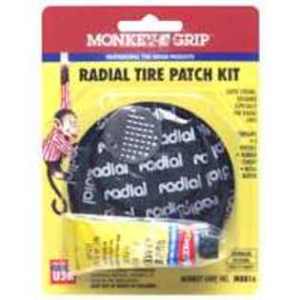 It wasn’t until the third summer working in the garage that I learned about plugs when my dad and I brought my uncle’s wheel to a garage to repair a leak and I was all ready to watch the repairman take the tire off of the wheel and repair it.  But instead, as soon as he found the hole, he just reached up to a shelf, pulled this black worm looking gooey thing and splashed some rubber cement on it and jammed it in the hole using some small kind of awl. Then took out his big pocket knife and cut off the part sticking out and handed the tire back to us and said, “No Charge”.  I was shocked. 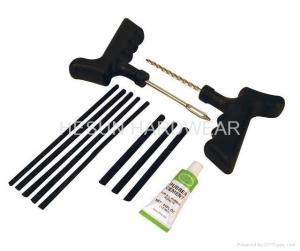 My first thought was that I couldn’t figure out why someone wouldn’t go through all the fun of wrestling with the tire to remove it from the rim, then clamping it down so that you could easily reach the hole inside the tire with a wire brush so you could buff the spot clean, and then applying the patch and rolling over it with another special Tire Patch rolling pin.  My second thought was, “Why don’t we have those at the plant?”

So when I arrived for my last summer as summer help a couple of weeks later, I asked Stanley Elmore why we didn’t use Tire Plugs.  The next thing I knew, we had them.  Trucks could practically line up outside with their flat tires and you could run up to them with an air hose, fill the tire up with air, spray some soapy water on it until you found the hole, pulled out the nail and jammed a plug in it.  Take out your pocket knife, cut off the tail sticking out, and then yell “Next!”  At least that is what I dreamed about doing.  There was a little more work when it actually came down to it.

So, what does all this have to do with Canine Parvovirus?  You see, the Jackrabbit population in Oklahoma was being controlled by the ever elusive wily coyote.

No. Not this one. Real Coyotes.

The coyotes had caught the parvovirus and were being destroyed almost to the point of distinction by 1980.  The Coal-Fired Power Plant ground in north central Oklahoma became a veritable Shangri-la for Jackrabbits.  The plant grounds are in the middle of a wildlife preserve created by the Electric Company that not only made the wildlife preserve, but the entire lake where all sorts of animals lived.  None were more proliferate than the Jackrabbits. 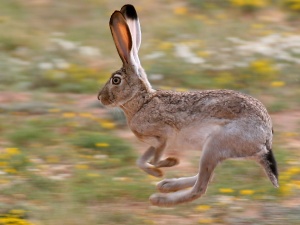 I learned a lot about wildlife working at this power plant.  For instance, This may be a picture of a Jack Rabbit, but Larry Riley could tell at 75 yards whether or not it was a Jack Rabbit or a Jill Rabbit.  Yep.  That’s what they called the female Jackrabbit.  There were Jack and Jill Rabbits.  I couldn’t tell the difference, but then half the time while Larry was pointing out a rabbit to me I not only couldn’t tell if it was a male or female, I couldn’t even see the rabbit because it was camouflaged in the dirt and weeds.

So, at this point you are probably wondering, “What does the multiplication of jackrabbits have to do with fixing flat tires?”  I was recently reminded by one of the most stellar of Power Plant Men Shift Supervisors, Joe Gallahar (notice how his name is only one letter away from “Gallahad” as in “Sir Galahad”), that the night crew of operators that brave the weather better than any mail carrier ever did, as one of their formidable duties had to perform Jackrabbit Roundup while riding three-wheel All Terrain Vehicles (ATVs). 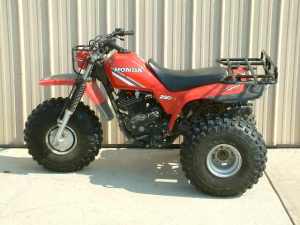 A Honda Three-wheeler used by Power Plant Men in 1980

It was important that the Jackrabbits not become too complacent around humans in this wholesale bliss, so the operators obviously felt it was their duty to see that they received their proper quota of daily (or nightly) exercise by being chased by ATVs.  There were enough thorny plants spread around the grassless dirt that inevitably at least one three-wheeler would end up with a flat tire by the end of the night.  And that is how the Canine Parvovirus impacted the flat fixin’ focus of the garage crew.  Fixing three-wheeler balloon tires was a slightly different animal altogether, plugs didn’t work as well on these tires, but the patches did.

I seem to remember another Power Plant A-Foreman that reads this post that used to take his three-wheeler out by the blowdown water ponds during lunch time and hone his skills maneuvering around the berm surrounding the two ponds.  His tires often needed a quick patch job later in the day.  We later went to Four-Wheelers as the added stability proved to be a much needed safety improvement.

There was also a clandestine group of Coyote hunters at the Power Plant, though I didn’t know it at the time.  Before (and many years after) the Parvovirus took its toll on the Coyotes, a group of Coyote Hunters would patrol the wilderness looking for signs of the highly elusive coyote.  I first realized something was up years later when I was a passenger in a company truck on our way to the river pumps when the driver slowed the truck down to a crawl as he looked out the window at something in the middle of the road.  He put the truck in park, climbed out and picked something up next to the truck.  He showed it to me.  It was fecal matter left behind by some creature.  Andy Tubbs was sure it was Coyote Dung and he wanted it for some reason.

The True Power Plant Electricians, Andy Tubbs and Ben Davis were the “fearless Coyote Hunters”, who were on a constant vigil for Coyotes.  This also gave them a chance to give their Greyhounds an opportunity to stretch their legs and get some exercise as a trapdoor to the large wooden box in the back of the truck was sprung open and the Greyhounds went to work chasing down the coyotes and bringing them back to the truck waiting for them at the next mile section.  Stretched Coyote skins were sometimes hung up in front of the cooling fans on the main power transformer to dry.

Here is a motivational video of a man named John Hardzog (Not a Power Plant Man) that hunts Coyotes with Greyhounds:
http://video.nytimes.com/video/2010/04/26/sports/1247467638442/coyote-vs-greyhound-one-man-s-sport.html

Anyway.  the last I heard about Doug House was that he had moved back to Louisiana and is still there to this day.  I don’t really know what he’s doing these days as he would be in his low 80’s.  I do know that I enjoyed the sport that he taught me, and that was how to be a “Flat Fixin’ Fool”.

Another Interesting factoid is that by the time I finished writing this blog, it became July 14, 2012.  Bill Moler, the Assistant Plant Manager during the time that I was a summer help became 80 years old today.