My first job, where I wasn’t working for myself, was when I was 14 years old and I became a dishwasher in a German Restaurant called Rhinelanders in Columbia Missouri.  It felt good feeding dishes through the dishwasher, and scrubbing pots and pans because I knew that in the scheme of things I was helping to feed the customers the best German food in a 60 mile radius.  Later when I went to work for the Hilton Inn as a dishwasher, I was serving a lot more people as they would host banquets with 100’s of people at one time.  After that I went to work for Sirloin Stockade as a dishwasher, busboy and finally a cook.  The number of people that would go through that restaurant in one day dwarfed the number of people we would serve at the Hilton Inn.

Nothing prepared me for the massive amount of people whose lives are touched each day by a Power Plant Electrician!  Or any Power Plant employee for that matter.  Our plant alone could turn the lights on for over one million people in their homes, offices and factories.  As a summer help mowing grass and cleaning up the park each week removing dirty diapers and rotting fish innards it never really had the impact that becoming an electrician did.

Part of the routine as an electrician was to do preventative maintenance on equipment to keep things in good working order.  We performed substation inspections, emergency backup battery checks.  We changed brushes on the generator exciter, performed elevator inspections and checked cathodic protection to make sure it was operational.  At certain times of the year we would check out the plant freeze protection to make sure the pipes weren’t going to freeze come winter.  I also worked on maintaining the precipitator equipment.  All of these things were needed to keep the plant running smoothly, but, though they were each fun in their own way, they didn’t have the impact on me that fixing something that was broken did. (ok.  two paragraphs ending in the word “did”… what does that tell you?).

I used to love getting a Maintenance Order that said that something was broken and we needed to go fix it.  It may have been a motor that had a bad bearing, or a cooling system that had shutdown, or the Dumper that dumped the coal trains had quit working.  One of my “speci-alities” (I know.  I misspelled that on purpose), was working on elevators.  — I will save my elevator stories for later.

When I was working on something that was broken, I could see more clearly how my job was related to keeping the lights on throughout the area of Oklahoma where our company served the public.  Depending on what you were working on, one wrong slip of the screwdriver and “pow”, I could make the lights blink for 3 million people.  I will talk more about certain events that happened throughout the years that I worked at the plant where things that happened at the plant were felt throughout our electric grid.  Sometimes even as far away as Chicago and Tennessee.   There was a “club” for people that shut a unit down.  It was called the “500 Club”.  It meant that you tripped the unit when it was generating 500 or more Megawatts of power.  I can say that “luckily”, I never was a member of that club.

Ok, so a broken elevator doesn’t directly impact the operation of the plant, but it was, during more than one occasion, a life threatening situation considering that a few times the elevator would pick the most opportune time to stall between 200 and 225 feet up the elevator shaft full of elderly visitors that were touring our flagship Power Plant on their way back down from experiencing the great view of the lake from the top of the boiler.  (I know.  My college English Professor would have a heyday with that run-on sentence). — actually, that sentence was so long, I think I’ll make it the only sentence in the entire paragraph, — well, except for my comments about it….

Charles Foster, my foreman and best friend, took me up to the top of the boiler soon after I became an electrician and showed me the “Elevator Penthouse”.  I know.  “Elevator Penthouse”… Sounds like a nice place….  Well.  It wasn’t bad after you swept out the dead moths, beetles and crickets that had accumulated since the last Elevator Inspection.  It was a noisy room on the top of the elevator shaft where the elevator motor buzzed as it pulled the elevator up and let it down.  Stopping on floors where someone had pushed a button.

I told you earlier that my elevator stories will be in a later post, so for this story, I’ll just say that Charles set me down on my tool bucket (which doubled as my portable stool and tripled as my portable trash can), in front of a panel of about 100 relays all picking up and dropping out as the elevator made its way up and down.  He told me to study the blueprints that hung on the side of the panel and watch the relays until I understood how it all worked.

So, one afternoon, I sat there for about 4 hours doing nothing but watching relays light up and drop out.  On the other side of that panel were the main relays.  There were relays there we called “Christmas Tree” relays because they looked like a fir tree.  I made some notes on a piece of paper about the sequence that the relays would pick up and drop out that I kept in my wallet.  I used those notes years later (in 2000) when I was writing task lists in SAP (our Enterprise Resource Planning computer system) on how to troubleshoot the elevator controls.    Anyway, that was how I learned all about how elevator logic works.  You know what?  It is just like writing a computer program using computer code.  It is basically a set of instructions with rules built-in, only it was done with relays. 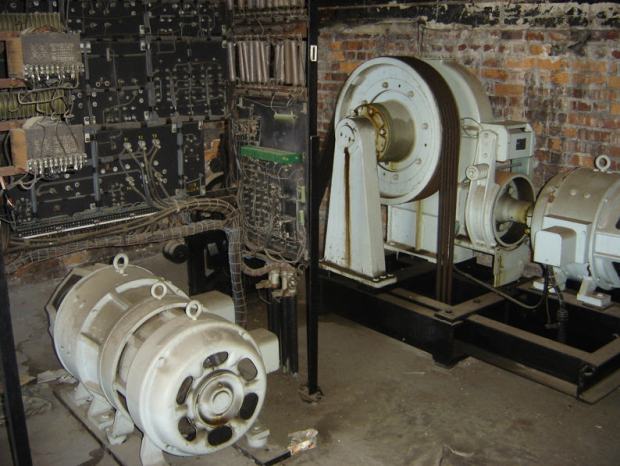 A Montgomery Elevator Penthouse similar to the boiler elevator penthouses.  The Christmas tree relays are halfway down on the right side of the left panel

Well.  Back to helping humanity….  So, usually when we were working on something that was broken there was an operator somewhere that was waiting for the equipment to be repaired so that they could go on with their job.  Sometimes the Shift Supervisor would be calling us asking us periodically when we were going to be done because they were running low on coal in the silos and were going to have to lower the load on the units if we didn’t hurry up.  It was times like that when you fixed the kill switch on the side of the 10 or 11 conveyor that supply the coal to the plant from  the coalyard that you really understood just where you stood with your fellow man. 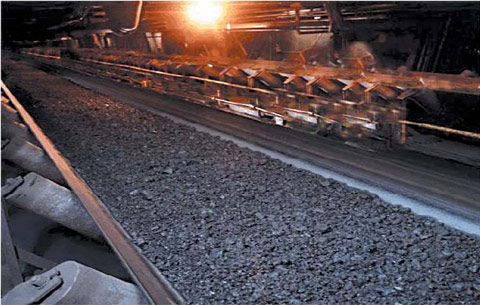 Coal conveyor carrying coal to the coal silos from the coalyard

I am writing about this not because I want to pat myself on the back.  Though I often did feel really proud as I returned to the truck with my tool bucket after coming down from a conveyor after fixing something.  I would feel like taking a bow, though I was often by myself in situations like that when I wasn’t with my “bucket buddy”.  At least the Shift Supervisor and the control room operators were very grateful when you would fix something critical to keeping the plant operating at full steam (and I mean that literally…. The electricity is made by the steam from the boiler that turned the turbine that spun the generator).

No.  I am writing about this because it would hit home to me at times like these how much each of us depend on each other.  We all know about how important it is to have a police force keeping order and having fire fighters and paramedics on standby to rush to protect families in time of distress.  People in jobs like those are as obvious as the soldiers that protect our nation.

I think the majority of us have a much bigger impact on the rest of society than we realize.  I think the Power Plant Men and Women that I worked with never gave it much thought.  Like the person washing dishes in a restaurant, they didn’t look at themselves as heroes.  But they are (I know… Sentence fragment).  Each day they moved through an environment where a boiler ghost could reach out and grab them.  They distinctively know that they are standing next to a dragon that could wake up at any moment and blast them from the face of the earth, but they don’t let it deter them from the immediate job at hand.

When the boilers were being brought on line for the first time in 1979 and 1980, when you walked through the boiler area, you carried a household straw broom with you that you waved in front of you like someone knocking spider webs out of the way (I called it searching for the boiler ghost).  It was explained to me at the time that this was done to detect if there was steam leaking from the pipes.  If steam was leaking from some of the pipes, you wouldn’t be able to see it, but if you stepped into the flow of the steam, it could cut you in half before you even realized there was something wrong.  When the steam hit the broom, it would knock the broom to the side, and you would know the leak was there.  Kind of like the canary in the mine.

I remember one day when everyone was told to leave Unit 1 boiler because during an emergency, the entire boiler was at risk of melting to the ground.  If not for the quick action of brave Power Plant Men, this was avoided and the lights in the hospitals in Oklahoma City and the rest of Central Oklahoma didn’t blink once.  The dragon had awakened, but was quickly subdued and put back in its place.

I entitled this post “Serving Mankind Power Plant Style”, but isn’t that what we all do?  If we aren’t serving Mankind, then why are we here?  Today I have a very different job.  I work at Dell Inc., the computer company.  Our company creates computers for people around the world.  We create and sell a computer about once every 2 seconds.  At the electric company we had about 3,000 people that served 3 million.  At Dell, we provide high quality computers for a price that allows even lower income families to enter the computer age.  Computers allow families to connect with each other and expand their lives in ways that were not even conceived of a few years ago.

Even though I spend my days serving my internal customers at Dell, I know that in the big scheme of things along with over 100,000 other employees, I am helping to impact the lives of over a billion people worldwide!  I wouldn’t be able to do much if down the road the brave men and women at a Power Plant weren’t keeping the lights on.  It is kind of like the idea of “Pay it Forward.”

So, the bottom line of this post is… All life is precious.  Whatever we do in this life, in one way or other, impacts the rest of us.  We go through life thinking that we live in a much smaller bubble than we really do.  The real bubble that we live in is this planet and just like every cell in our body is in some way supported by the other cells, it is that way with us.  Don’t discount what you do in life.  It may seem insignificant, but the smile you give to someone today will be “paid forward” and will impact every one of us.