I remember the moment when it dawned on me that I may be witnessing an incredible Coal-fired Power Plant Conspiracy!  I had just walked into the Control Room one morning in 1990 at the plant in North Central Oklahoma and saw the Shift Supervisor Jack Maloy and Merl Wright in a state of high concentration.  I always knew something was up when Jack Maloy was standing behind the large blue monitors near the Unit 1 Main Electric Board watching the big picture while the Control Room Operator Merl Wright was at the Main Control Panel turning knobs, tapping indicators to make sure they had the correct readings, twisting switches, holding them until red lights turned green…

I love this picture! — not our plant but may be part of the conspiracy

Where had I seen this before?  Something was telling me that everything wasn’t as it seemed.  Sure… there was an emergency going on.  There was no doubt about that.  I knew that between Jack Maloy and Merl Wright, the current problem of the main boiler drum losing water was quickly going to be solved.  I knew that Oklahoma City wasn’t going to experience any blackouts that day.  This was a Cracker Jack team!  But I couldn’t help thinking I had seen this somewhere before, and it was gnawing at my common sense.

Here is a picture of Jack Maloy’s team at the time: 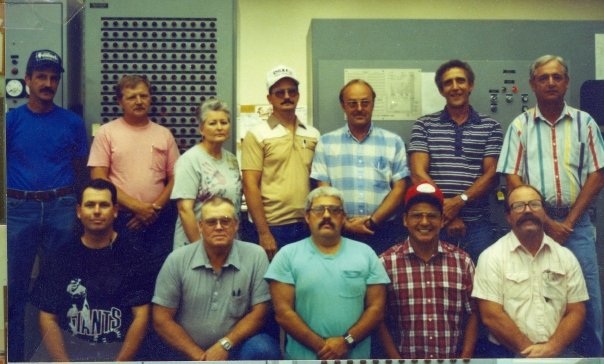 Jack Maloy is standing on the far right with the vertically striped shirt (like bars in a jail) directly behind Merl Wright – Coincidence?  I think not.

I backed off in a corner to observe the situation while a crowd of operators began to grow to watch the master Shift Supervisor and his faithful Control Room Operator divert a disaster.  Merl picked up the walkie talkie from the desk and called Larry Tapp ( Larry is the man in the light blue shirt in the front row in the middle.  He’s the only one in the front row that is actually standing, while the rest are down on their knees while the picture is being taken).

Larry was on the boiler opening and closing valves.  John Belusko, the Unit Supervisor was out there with him.  I can’t tell you what magic they were performing, since I think that’s top secret.  I figured that, because the operators seemed to be talking in code.  Merl would key the microphone on the walkie talkie and say something like, “Larry, 45”.  Larry would reply with something like “Quarter Turn”.  “Position?”, “18 as far as I can tell”.

I translated the coded words to say:  “….crawling under the path of the boom, whipped hold of a rope, secured one end to the bulwarks and then flinging the other like a lasso, caught it around the boom as it swept over his head, and at the next jerk, the spar was that way trapped and all was safe.”  (Something I had read in Moby Dick, by Herman Melville).

Jack paced back and forth behind the counter with the monitors.  Then he stopped and read the paper that was streaming out of the alarm printer as it continued humming as the paper piled up on the floor in front of him.  Jack was a heavy smoker, and I could tell that right then he would rather be standing out on the T-G floor having a smoke at that moment.  Before cigarettes were banned in the control room, Jack would have been pointing at that board with the cigarette.

When the water level began rising in the Boiler Drum, I could see the relieve on everyone’s face.  I supposed it meant that a major catastrophe had been avoided due to the intricate knowledge that each operator possessed and their ability to quickly respond to any situation.  This made the uneasy feeling I was having even worse.  I couldn’t shake the feeling that I had seen this before.  Just like Deja Vu.

It wasn’t till about a week later when my mom asked me if I knew someone at work named Jack Maloy.  She had been talking to a friend of hers from Church named Louise and she mentioned that her husband worked at the Power Plant north of town.  I replied by saying that I knew Jack Maloy well.  He is a Shift Supervisor.  She said that his wife Louise told her that Jack was a real nice person, but she wished that he would go to Church more.  She hoped he would come around to that some day.

Then my mom mentioned something that brought back that feeling of uneasiness again.  She said that the Maloys had moved to Oklahoma in 1979 from California.  I thought that was odd that Jack had only arrived in Oklahoma in 1979, as he was a Shift Supervisor for as long as I could remember.  Maybe even as far back as 1979 when I first worked at the plant as a summer help.

Then it dawned on me.  You see…. It all went back to a lunch break about a year earlier when Charles Foster, an Electric Foreman and I were eating lunch in the Electric Shop office.  When we didn’t know what to talk about, our favorite past time was to talk about movies and TV shows we had watched.  We would describe the movie in detail to each other.  On this particular day, Charles was doing the talking, and he was telling me about a movie that had to do with a Power Plant in California (yeah.  California).

Charles went on to tell me about how at one part of the movie the water level was dropping in a tank and it was imperative that they raise the water level or some big disaster was going to happen. — Now you see where I’m going with this?  Yeah.  Sounds familiar doesn’t it?  At that time, the incident in the Control Room hadn’t happened yet with Jack Maloy.

The movie sounded interesting so, when I had the opportunity, we rented the VHS tape from the video store and I watched it.  Sure enough.  This is what I saw….

Here is Jack Maloy and Merl Wright from the team picture above:

Even Wilford Brimley’s hairline is the same as Merl Wright’s hairline!

For those of you who don’t know yet.  The name of the movie is:  The China Syndrome.  It is about a nuclear Power Plant that has a near meltdown: 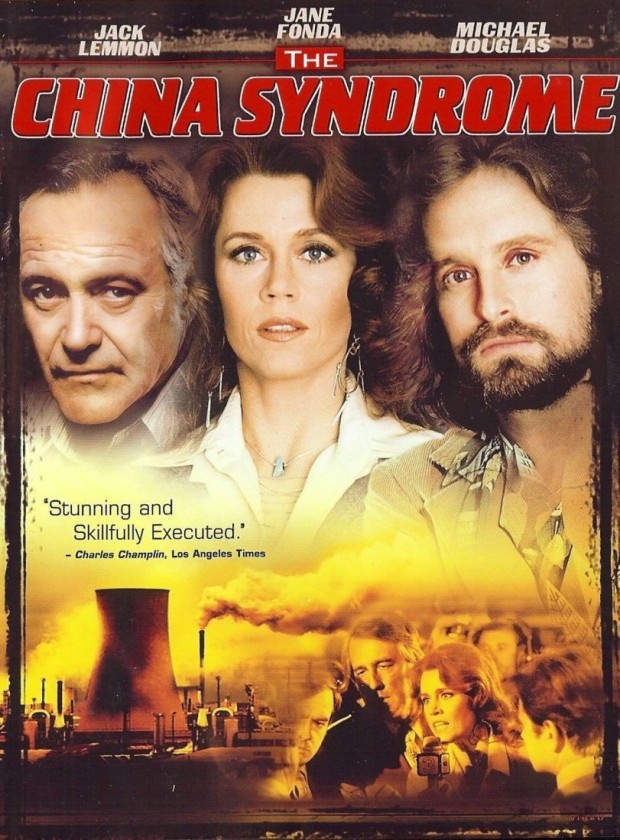 Need more?  Ok.  — hey this is fun…..  So…. This movie came out in 1979.  The same year that Jack Maloy shows up in Oklahoma from California.  Obviously an experienced Power Plant Shift Supervisor.  Merl Wright went to work 10 months earlier in 1978 at an older power plant just down the road (The old Osage plant), and then shortly after, was transferred to the same plant with Jack Maloy, only to end up working for Jack.

I mentioned this coincidence to Charles Foster one day, but as far as I know, I never mentioned it again to anyone else… Maybe Scott Hubbard, since he was my best friend as well…

So, here are my thoughts about this….

What if Jack Maloy was the Shift Supervisor being portrayed in the movie “The China Syndrome”?  He needed to move out of California just before the movie came out just in case someone found out his true identity.  Being a Shift Supervisor at a Nuclear Power Plant, he would surely be in high demand at any Electric Company.  Our particular Power Plant was in an out-of-the-way location.

I don’t know Merl’s earlier background, so I can still think that he moved to Oklahoma from California and began working for the Electric Company on April 24, 1978 just two weeks before I moved to Oklahoma from Columbia, Missouri.  Since I don’t know any better, I can continue thinking this.  It makes it more fun that way. — Of course, Merl, who may on occasion read this blog, may correct me in the comment section below…

So, what was it that I was experiencing that morning when I walked in the control room?  I mean… What was I “really” experiencing?  If, suppose, Jack and Merl really are the two that were in the control room when the “China Syndrome” almost occurred?  Was it just an innocent crisis where the water level somehow decided to drop to a dangerously low level all by itself because of a faulty valve that was supposed to be closed, but was really open?

Was Jack and Merl trying to relive the excitement they had felt years earlier when they worked in a nuclear plant and they almost melted a hole all the way from there to China?  Was this what experienced bored Power Plant Heroes do during downtime?  I suppose it’s possible.  It could have been a drill drummed up to test the acuity of the operators.  To keep them on their toes.  All “Shipshape and Bristol Fashion” just like on the Pequod in Moby Dick.

Something to think about.

Today Merl still lives in Ponca City, Oklahoma.  Jack Maloy has moved to Cape Carol, Florida with his wife Louise.  I suppose now that he has more time on his hand, hopefully he has given up smoking and is now making his wife happy by attending Church regularly.  We can only hope he is at peace, on the opposite side of the United States from California.

We are all glad that on his way to Florida from California that Jack decided to stop for 25 or so years in Oklahoma to Supervise the Coal-fired Power Plant out in the middle of the countryside….  As Charles Champlin from the Los Angeles Times said of the movie “The China Syndrome”  — “Stunning and Skillfully Executed!”  — Yeah.  That describes Merl and Jack.  Either way… Conspiracy or not.  These two men are my heroes!

I wish Merl and Jack the best rest of their lives!