Originally Posted March 9, 2012.  I have added some pictures and slightly edited:

I had the feeling it would be an interesting day when the first thing that Stanley Elmore asked me when I sat down for our morning meeting was, “Kevin, are you afraid of heights?”  Well, since before that day I hadn’t been afraid of heights, I told him I wasn’t.  Then Stanley, who liked most of all to joke around with people, started hinting through facial expressions of excitement (such as grinning real big and raising his eyebrows up to where his hair line used to be when he was younger) and by uttering sounds like “boy, well, yeah…. huh, I guess we’ll see” while shaking his head as if in disbelief.  He told me to get with Aubrey after the meeting because there was a job I needed to help him out with.

Aubrey Cargill was our painter.  He worked out of the garage that I worked out of the last 3 years of working as a summer help.  There was a paint room in the back of the garage on the side where the carpenter, Fred Hesser built cabinets and other great works of art.  He was the best carpenter I have ever met, as well as one of the finest gentlemen I have ever known.  He wasn’t in the category of Power Plant man, as he didn’t involve himself in most of the power plant operations or maintenance, but to this day, Power Plant Men from all over Oklahoma can visit Sooner Plant on overhaul and admire the woodworking masterpieces created by Carpenter Fred many years earlier.

I had worked with Aubrey my first year as a summer help.  The garage hadn’t been built yet, and Aubrey had not been assigned as a painter, as both units were still under construction.  Aubrey was the same age as my father and in his mid-forties that first summer.  His favorite buddy was Ben Hutchinson.  Whereever one went, the other was not far away.  All during the first summer, the lake on the hill was still being filled by pumping water up from the Arkansas river.

Most of the last two weeks that summer I worked with Aubrey and Ben picking up driftwood along the dikes that were built on the lake to route the water from the discharge from the plant to the far side of the lake from where the water enters the plant to cool the condensers.  The idea is that the water has to flow all the way around the lake before it is used to cool the condenser again.  So, Ben and Aubrey took turns driving a big dump truck down the dike while I walked down one side of the dike around the water level and Aubrey or Ben walked down the other side, and we would toss wood up the dike into the dump truck. 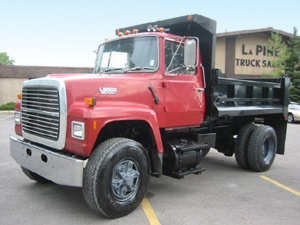 This was quite a throw, and often resulted in a big log being tossed up the dike just to hit the side of the dump truck creating a loud banging sound.  Anyway, when you consider that there are probably about 6 miles of dikes all together, it was quite a task to clean up all the driftwood that had accumulated in this man made lake.  After doing this for two weeks I learned the true meaning of the word “bursitis”.

After the morning meeting with Stanley Elmore I followed Aubrey into the carpenter shop, where he pointed to two buckets of paint that I was to carry, while he grabbed a canvas tool bag filled with large paint brushes and other painting tools and some white rope that looked like it had the seat of wooden swing on one end.  Aubrey nodded to Fred, and I understood by this that Fred had created the wooden swing that had four pieces of rope knotted through each of the corners of the seat and were connected to the main rope using some kind of small shackle.  When I asked Aubrey what that was, he told me that it is was a Boatswain Chair.  “Oh.” I think I said, “It looks like a swing.”

On the way to the boilers, we stopped by the tool room and I checked out a safety belt.  I could see Aubrey nodding at Bud Schoonover about my having to check out a safety belt, and what implication that had.  I of course preferred to think that my fellow employees would not purposely put me in harms way, so I went along acting as if I was oblivious to whatever fate awaited me.

We took the elevator on #1 Boiler to the 11th floor (which is actually about 22 stories up.  There are only 12 stops on the boiler elevator, but the building is really 25 stories to the very top.  So Power Plant men call the extra floors things like 8 1/2 when you get off the elevator where it says 8, and go up one flight of stairs.

Aubrey explained to me that we need to paint a drain pipe that is below us a couple of floors that goes down from there to just above floor 7 1/2 where it turns.  He said that he could paint the rest, but he needed my help to paint the pipe where it drops straight down, because there isn’t any way to reach it, except by dropping someone off the side of the boiler over a handrail and lowering them down to the pipe, and that turned out to be me.

He explained how the safety belt worked.  He said that I clip the lanyard in the ring at the top of the boatswain chair so that if I slip off the chair I wouldn’t fall all the way down, and then he could gradually lower me on down to the landing.  he didn’t explain to me at the time that the weight of my body free-falling three feet before coming to the end of the lanyard would have been a sufficient enough force to snap the white rope in half.  I guess he didn’t know about that.  But that was ok for me, because I didn’t know about it either — at the time.  We didn’t use Safety Harnesses at that time.  Just a belt around the waist.

A Safety Belt like this, only skinnier without all the extra padding

So as I tied the canvas bag to the bottom of the chair, I saw Aubrey quickly wrap the rope around the handrail making some sort of half hitch knot.  I wasn’t too sure about that so I asked Aubrey where he learned to tie a knot like that and he told me in the Navy.  That was all I needed to hear.  As soon as he told me he learned knot tying in the Navy, I felt completely secure.  I figured if anyone knew the right way to tie a knot it’s someone in the Navy.

It is always windy in this part of Oklahoma in the summer, and the wind was blowing that day, so, I began to spin around and float this way and that.  That continued until Aubrey had lowered me down to the pipe that I was going to paint and I was able to wrap my legs around it and wait for my head to stop spinning.

Then Aubrey lowered down another rope that had a bucket of paint tied to it.   Then I began my job of painting the pipe as Aubrey had hold of the rope and was slowly lowering me down.  Luckily Aubrey didn’t have to sneeze, or wasn’t chased by a wasp while he was doing this.  Thinking about that, I kept my legs wrapped around the pipe pretty tight just in case Aubrey had a heart attack or something.

The pipe really did need painting.  So, I knew this wasn’t completely just a joke to toss me out on a swing in the middle of the air hanging onto a rope with one hand while attempting to paint a pipe.  It had the red primer on it that most of the piping had before it was painted so it looked out of place with all the other silver pipes, but I couldn’t help thinking about Jerry Lewis in the Movie, “Who’s Minding the Store” where Jerry Lewis is told to paint the globe on the end of a flagpole that is located out the window on a top floor of the building, and he begins by trying to climb out on the flagpole with a bucket of paint in his mouth with little success.  But like Jerry, I figured it had to be done, so I just went ahead and did it.

Fortunately, I found out right away that I wasn’t afraid of heights, even at this height and under these conditions.  So, instead of fainting away, I just painted away and finally ended up on floor 7  1/2 which is right next to the Tripper Gallery.  I think I finished this a little after morning break but I don’t think Aubrey wanted to stop for break just to lower me down and then have to start from the top again lowering me all the way down one more time.

This brings me to another point.  Notice where I landed.  Right next to the Tripper Gallery.  Power Plant ingenuity has a way of naming parts of the plant with interesting names.  The first time I heard that we were going to the tripper gallery to shovel coal, I half expected to see paintings lining the walls.  It sounded like such a nice place to visit…. “Tripper Gallery”.  It sort of rolls off your tongue.  Especially if you try saying it with a French accent.

The Tripper Gallery is neither eloquent nor French.  It is where the coal from the coal yard is dumped into the Coal Silos just above the Bowl Mills.  — Yes.  Bowl Mills.  I know.  It sounds like a breakfast cereal.  Almost like Malt-O-Meal in a bowl.  So, the Tripper Gallery is a long narrow room (hence the word Gallery), and there are two machines called Trippers that travels from one silo to the next dumping coal from the conveyor belt down into the coal silo, and when the silo is full, a switch is triggered (or tripped) which tells the machine to go to the next silo.  Since the switch “trips” and tells the machine to move, they call the machine the “Tripper”.

I know.  That last paragraph didn’t have anything to do with painting the drain pipe.  But I thought since I mentioned the Tripper Gallery, I might as well explain what it is.  Anyway, when we returned to the shop I watched as Stanley Elmore went over to Aubrey to see how I did when I found out he was going to drop me over the side of the boiler in a wooden chair.  I could see that Aubrey gave him a good report because Stanley looked a little disappointed that this Power Plant Joke (even though essential), hadn’t resulted in visibly shaking me up.