Where Do Knights of the Past Go To Fight Dragons Today

It may not seem obvious what fighting dragons has to do with Power Plant Men but when I was a Power Plant Man in-training I was able to witness quite the battle between the Power Plant Men and a Dragon one night.  The main weapon they used was a Lance and the Dragon spewed hot scalding water in their faces as they stood against it to fell that foul beast!  The Hot fiery breath blowing two men off of a landing with one of them ending up hospitalized.

I was in training to be a Power Plant Man my first four years as a summer help.  The first summer I worked in the maintenance shop as a helper on different crews of mechanics.  The second summer (1980), however, was when I began learning the skills to become a Knight of the Power Plant Kingdom.  I was first introduced to my weapons of battle by Stanley Elmore when he attempted to train the fresh summer help crew by giving each of us a Weed Wacker: 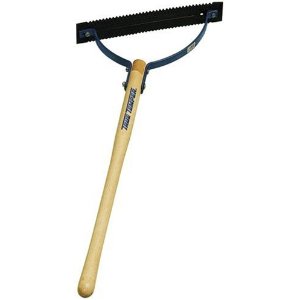 We were driven to the road leading out to the dam. A three mile stretch of guard rails on both sides with weeds growing up around them and down the dike to the water.  Our job was to chop all of the weeds from there to the dam on both sides of the road.  And when we were done, there were plenty of other roadways that needed to be cleared.  Sort of Chain Gang style only without the chains.  Needless to say, we came back for break and all of our weed wackers were broken.  We were chopping large weeds, a lot of them full grown sunflowers taller than us.  The weed wackers just bent back and forth until they quickly fell apart.

So, Stanley went to the welders and had them weld the blades back on the weed wackers using angle iron.  This worked a little better, but the flimsy blades were no match for the thousands of sunflowers and thistles and small bushes. 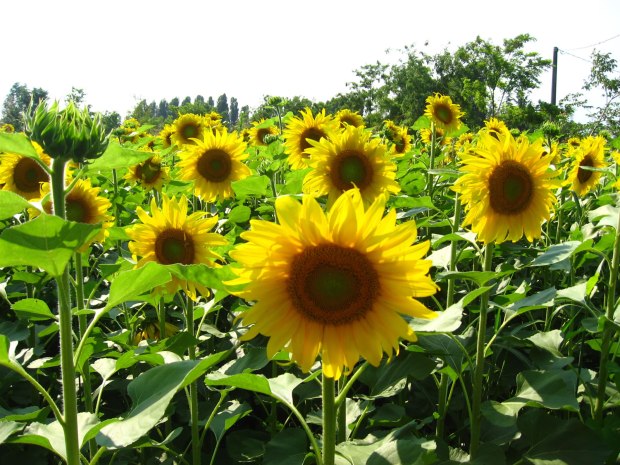 An Army of Sunflowers invading the land!

So Stanley did the next best thing.  The next day he brought us some heavy duty brush choppers that he had the welding shop reinforce, making them weigh about 15 pounds.

Armed with this I found that chopping Sunflowers became enjoyable.  With each swing of this heavy weight I could lay a sunflower down without missing a stride.  I was well on my way as squire of the Power Plant Knights.  Later Stanley gave us gas powered Industrial sized weed-eaters with saw blades.  The weed-eater attached to a harness so you could swing it back and forth all day mowing down the enemy.  I wore a face shield and ear muffs attached to my hardhat to guard against flying debris.  This was much like the helmets worn by knights, and probably as hot I’m sure as we cleared away miles and miles of roadway of weeds under the searing sun.

But nothing prepared me as much as one Saturday after shoveling coal since 8 in the morning until 5 in the evening during coal clean-up when we were told that the Number 1 Boiler had a large buildup of ash in the bottom ash hopper and the clinker grinder couldn’t break it up.  If we weren’t able to break it up quickly the boiler would have to come off line and we would stop producing electricity (as number 2 boiler was not yet online).   So, the Power Plant Men who had been shoveling coal since the break of day made their way to the bottom ash hopper under the boiler.

Some began building a scaffold (as if they had done this before).  Chuck Ross was in charge along with Cleve Smith and they had developed a plan where the Power Plant Men would stand on the scaffold back away from the hopper while someone would pop open the hopper door by standing off to one side (I think this was Cleve Smith) and one unlucky guy standing on the landing directly in front of the hopper door would guide a 30 foot lance into the portal and into the jaws of the dragon.  Once there, the he-men in the back would stab the rock hard bottom ash with all of their might as steaming hot water came gushing out the doorway.

I don’t remember if we drew lots or someone just said, “Let the summer help do it.” but I was the person chosen to stand directly in front of the door of the bottom ash hopper when it was knocked open as Cleve hit the latch with a sledge hammer.  I was told that water was going to come blasting out of the doorway, so be prepared, because it was important that I guide the lance into the portal so that it could be used to smash up the bottom ash clinkers enough to allow the clinker grinder to do it’s work.

I wasn’t really prepared when the door was knocked open.  First there was a loud boom as the door flew open and hit the side of the structure.  I was blown back against the handrail by hot water (The stairway came up the side then, not like it is today).  After gaining my footing, I was able to guide the lance through the door so the 6 or so he-men behind me could go to work thrusting the lance in, backing it out, and thrusting it back in all while I was guiding it so that it remained lined up with the doorway.  I also was not prepared for the hot water to turn into scalding hot water as the water level in the bottom ash hopper became lower.  The main hopper gate wasn’t able to close the first few times because of the clinkers, so all I could do was hope that I didn’t end up like a boiled egg by the time we were through.

We repeated these steps over and over until the clinker grinder was finally able to function.  At one point when the hopper was being filled, everyone took off running when all of the sudden water was pouring out from up above all over the bottom area of the boiler.  I didn’t understand how that could have happened until someone explained to me that the bottom ash hopper sits underneath the boiler, but the boiler is suspended from the top and floats over the bottom ash hopper, and when the hopper was filled with water too high, it overflowed, and spilled out the space between the hopper and the boiler. (Remember the Bottom Ash Overflow Sump Pump from a previous post?  Well, it wasn’t working that night).

We all went up to the break room to take a break.  It was about 10 pm.  We were given big “atta boys” for saving the company tons of money because they didn’t have to shutdown the boiler to clear the hopper.  We waited around to see if they would send us home for the night.  A little while later, we found out that there was a section of ash that was still built up on the side of the boiler just above the hopper and they were afraid that if it were to fall into the hopper all at once, it would jam up the clinker grinder again and leave us in the same predicament as before.  So we went back to work trying to figure out how to knock down the shelf of hard ash piece at a time.

It turned out that if you shoot the ash with a fire hose, the ash would sort of explode because of the cold water hitting such a hot object.  So, a fire hose was used to knock down most of the ash shelf and it worked pretty good.  After a while there was only one more spot to knock down and we could all go home.  The only problem was that it was directly above the hatchway door on one side of the boiler, and it was too far across the boiler to hit it with the fire hose.  So Mike Vogle was called out (he was a new welder that hadn’t been at the plant too long at this point).  It was Mike’s job to weld the fire hose nozzle to the end of a long pipe (the second lance of the evening) so that it could be extended into the boiler far enough to shoot water on the ash shelf above the hatchway door on the far side.

At one point Chuck told me to go see how Mike was doing with the pipe, and I went to the welding shop and asked him how long it would be.  He told me not much longer, maybe 15 minutes.  I was on my way back to the boiler when I met Cleve Smith and Chuck Ross on their way back to the shop by way of the locker room.  So, I followed along behind them in the dark.

I told them Mike would be done in about 15 minutes and they said that it was all right because the ash was knocked down.  They didn’t need it anymore.  As they passed by the tool room back door, by the light from the window I could see blood running down the arms of both Chuck and Cleve.  So, I said, “Hey Chuck.  Do you know you’re bleeding?”  He replied that he did, and then I realized that both of them had been injured.

They both walked straight into the shower and Mike Grayson came in and explained to me that they had tried to knock down the ash from the hatchway directly underneath the shelf of ash, and when they did, the shelf broke loose and fell.  When that happened, it sent a blast of hot air through the doorway knocking Chuck and Cleve off of the landing as their arms went up to protect their faces.

Mike Grayson was my ride home.  We left shortly after the ambulance left to bring Chuck to the hospital in Stillwater.  It was close to 2 in the morning.  Mike was a new employee also.  We both sat silently in the truck on the way home numbed by the accident and worn out from shoveling coal and lancing the boiler, which we had started 21 hours before.

I was so tired I took Mike’s lunch box by mistake.  I was surprised when he called me the next morning and told me, but when I looked in the lunchbox, sure enough.  There was his worn Bible, a typical Power Plant Man’s lunch box tool.  My dad drove me by his house near the hospital to exchange lunch boxes.  After that I went to visit Chuck in the hospital where he had both of his arms bandaged up.  Other than those burns, he was all right.

No one knows more than Chuck and Cleve that they paid dearly for not waiting for Mike Vogle to finish the nozzle extension.  Something happens when you’ve been up all day working hard, meeting one frustration after another.  When you are up at the crack of dawn, and it becomes past midnight, it is easy to let your guard down.  When fighting dragons, if you leave any opportunity for them to strike back they will.  We defeated the dragon that night, but not without its victims.  Chuck recovered and was quickly ready for the next battle.  All of those men that were there that night are heroes to me.  Today I don’t remember everyone that was there, but they were all on my list of True Power Plant Knights!

That was awesome! I love Dragons

but I love sunflowers so I was sad to here they were slaughtered.