You might think that a woman welder spending her time at a Power Plant welding tubes in the dark insides of the boiler during overhaul, or crammed up inside a bowl mill where the air you breathe can be as hot as 160 degrees Fahrenheit would fit the image of a broad shouldered tough woman that you wouldn’t want to meet in an Alley at night.   This in no way describes Juliene.  If I had a picture of Juliene, you would see a woman of small stature with a slightly worn countenance and a humble but confident expression with a slight smile that had been etched permanently  into her face from years of being content with whatever lot in life she had been dealt.

I am not able to say what her life was like before she arrived at the Power Plant in 1985 one week before her 34th birthday.  I know she had one son named Joseph Alley and she had been married to a man named Red.  For me, her life began when I first met her at the tool room waiting to get a tool from Bud Schoonover.  She was being treated with extra care by her welding crew.  They were very protective of her at first.  My first impression was that she was kind and soft spoken.

I didn’t work around Juliene for quite a while.   I don’t even remember if she had worked her way through the Labor Crew as we were required when I hired on at the plant.  I worked with Juliene only after the last downsizing when we were on the same cross-functional team in 1994.  By that time, the welders referred to Juliene as their “Mom”.

I never heard an unkind word come from Juliene.  It may have happened immediately following a Power Plant Joke had been played on her, but since it never would have occurred to me to play a joke on her, I only ever heard kind words from Juliene.  I’m sure her son  Joe could tell us more about that.  Juliene spent a lot of time working with Ed Shiever.  They were about the same height and it seemed to me that the two of them were paired often to work the same jobs. 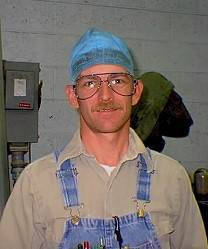 The title “Mom” wasn’t given to her as a ceremonial title just because of her gender.  When I watched Juliene with the welders, I could see and hear that she treated each one of the welders as if she was really and truly their Mother.  I have heard her scold them, put them in their places, and even calm them down when they needed to be put in “time out”.

Juliene did not die unexpectedly.  She died from a failing liver that lasted over many months.  It seems to me that her son Joe married his sweetheart Shauna a little earlier than intended so that it was in time for his Mother to attend the wedding in September 1999, eight months before she passed away.  The last time I talked with Juliene was when someone at the plant had called her in the hospital in Oklahoma City from the tool room telephone.  When I walked in the tool room to get a part, someone asked me if I wanted to speak with Juliene.

When I talked to her, I could tell that she was trying to be pleasant in spite of the knowledge that she only had about a week or two left.  I told her I would be praying for her.  She asked me if I knew where she could find a new liver.  I think I said something like, “I don’t have a spare one myself, but these machinists here are pretty good, maybe we can have one of them whip one up real quick.” 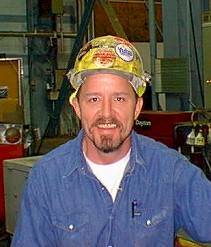 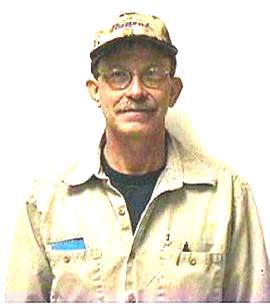 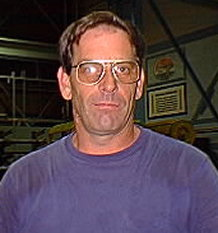 With Ed Shiever, that makes over a dozen Power Plant Sons.  I’m sure there are others.  (If any others would like to be added, let me know, and if I have your pictures, I’ll post them here).

I attended Juliene’s funeral ceremony at the First Baptist Church in Pawnee on May 6, 2000.  The church was crowded that day with Power Plant Men.  Some had come from other Power Plants in the state to say goodbye to the Power Plant Mom we had all come to love.  Her Power Plant Sons stood up front and said their departing words to Juliene and to share their memories.

I have said in one of my early Power Plant Posts that each time a True Power Plant Man or Woman left the Power Plant that the character of the Power Plant would change.  The gift that Juliene Alley gave to the maintenance shop for many years was one of calm and civility.  I watched the welders over the years, and some of them began their Power Plant career with a less than “savory” attitude about life.  Over the years, I think the affect of having Juliene constantly in their lives tamed the welding shop to mold them into the respectable, caring, fine Power Plant Men that they became.  When Juliene left us that day at the Church, she left her character behind in her Power Plant Sons.

In memory of their Power Plant Mother, no character was lost from the Power Plant the day Juliene departed to tend to other pastures.  Eight months to the day of Juliene’s death on January 3, 2001, Joseph Edward Alley, her son, joined the ranks of Power Plant Men as he came to work at the Power Plant.  The joy of having the actual son of Juliene working in the plant was a reflection of how much we all loved his Mother.

As you can see, Juliene’s family continues to grow.  Tomorrow we will be celebrating Mother’s Day.  Today, on Saturday, I remember back to Saturday May 6, 2000.  The day we celebrated our Power Plant Mother’s Day a week early.