“Take a Note Jan” said the Supervisor of Power Production

I remember the first time Martin Louthan, the supervisor over all the power plants, came to the Power Plant to meet with all the Power Plant Men a couple of months before Unit 1 came on line in 1979. I don’t know what he expected when he arrived, but I don’t think he expected the greeting he received when the meeting began and he asked us what we all wanted to talk about.

There were about 200 Power plant Men all crowded into the break room. Some sitting and a lot standing, as there was no leaning room against the walls. Martin Louthan began the meeting by saying that he wanted to come and meet with all the Power plant men every 6 months without the management in the room so that we could all speak freely. I don’t think that Martin actually thought the Power Plant Men would actually take him up on it. But they did.

Martin Louthan was from the Old School of Power Plant Men. He was what I would call a “Power Broker” Man. You can definitely tell that he had worked his way up through the ranks of Power Plant Politics and was very comfortable in his position as ruler of all the power plants. Martin had started as a Power Plant engineer and had spent time working at almost all of the power plants that had been built up to that time, including the Osage Plant that I had talked about in an earlier blog about the Power Plant Pioneers (Pioneers of Power Plant Fame Finally Find Peace).

Once again I must remind the reader that the Power Plant Manager at the time, Eldon Waugh enjoyed ruling over his power plant kingdom and any time he could find a way to wield his power, he would. He had created many miscellaneous rules at the plant to demonstrate this authority. Most of which were designed to be a nuisance to the average employee under his domain.

When Martin Louthan asked the crowded room if anyone had anything to say while the plant manager and their own foremen were out of the room, the Power Plant Men took the opportunity to let loose a barrage of grievances against the Power Plant Manager and his assistant.

The main topic was the rule that no one could fish on plant grounds. The Power Plant Men had been told that Oklahoma City (Corporate Headquarters) had made a rule that no one could fish in the lake from the plant grounds. This included the discharge where the warm water went into the lake from the condenser, which was not far from the engineer’s shack parking lot where everyone had to park at the time. Martin acted surprised. He said he hadn’t heard of a rule like that. 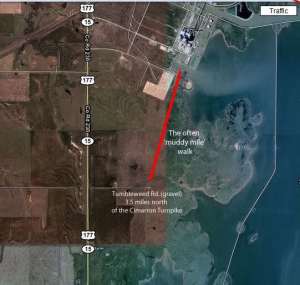 Sitting next to Martin Louthan was his secretary Janice Baker (Brady). Martin would say, “I’ll look into it. Take A note Jan! I’ll let you know what I find out.” Jan would write something down on her notepad. Then complaint after complaint kept coming, and Martin kept saying “Take a note Jan.” I remember Jan’s expression throughout the meeting. I couldn’t tell if it was one of wonder or a look of someone that was having writer’s cramp.

A Power Plant notepad Jan may have been using

After a few more visits from Martin, “Take a note Jan” became a phrase at the plant for something that needed to be looked into, but we knew we would never hear about again. It wasn’t long before Martin’s 6 month meetings turned into yearly meetings, and then eventually, he stopped having meetings with the Power Plant Men all together.

The nail in the coffin of Martin Louthan’s meetings happened when I was on Labor Crew. Martin had his yearly meeting some time in the middle of the summer of 1983. I was on the labor crew that summer.

One of the main complaints that year was that the assistant plant manager and the plant manager were constantly lying to us about one thing and then another. Martin asked the Power Plant Men for an example. Well. No one could come up with one on the spot. It was something you knew when you heard it, but if you didn’t write them down, then the next day you were too busy keeping the plant operational to remember the troubles of the day before.

Martin Louthan told the Power Plant Men that if they didn’t have any examples, then he would not be able to take any action. So, Jan didn’t have to take a note about that.

The Labor Crew bore the brunt of the next rule that came down from up above, and we were told that it had come from Oklahoma City (which is where Corporate Headquarters is located). A lot of people on labor crew had been there for a long time. Some had been there for about 2 years and were looking for an opportunity to move into maintenance or become an operator.

The economy had slowed down during those years as we were still recovering from the high unemployment and the downturn in the oil market in Oklahoma. Reaganomics hadn’t kicked in full steam yet, so those people who would have migrated onto other jobs were staying put.

Finally it was announced that a new crew was going to be started at the plant. It would be the Testing crew. An excellent opportunity for some of the people to finally leave the labor crew where they seemed to be held captive during those years.

Unfortunately for most, it was soon made known that the new positions required that the person have a college degree. It didn’t matter in what, as long as they had one. That left Jim Kanelakos and I as the only two power plant men-in-training that were eligible. I had a Bachelors of Arts in Psychology, and Jim had a Masters of Arts in Psychology.

Together we would stand out in the front of the Labor Crew building analyzing the other Power Plant Men using all of our education to help us determine the motivation for each person. Jim might say, “Do you ever notice how Charles Peavler will go off to do coal cleanup and then you don’t see him until lunch when he comes back completely clean, and nothing seems to have been cleaned?” And I would respond by saying, “Yes, I wonder how he manages to keep so clean when he’s obviously doing twice the work, both cleaning up the reclaim and messing it all back up again. What drives a man to be so… um… Productive?” Jim might respond by saying something like, “It is probably because he hates his father and this is his way of seeking revenge on him for all the times he made him clean his bedroom after his brother had messed it up.”

No. We really didn’t say that, but I’m sure we thought about it often enough.

Then came the clincher… It seems that when Eldon Waugh learned that requiring a college degree didn’t automatically disqualify all of the labor crew hands, a new rule came down. “No one already employed by the Electric Company could be considered for the job.” Again we were told, “This had come down from Oklahoma City.”

To compound the issue, a new program had been put in place just that summer called the Employee Assistance Program which included a new job announcement process that allowed everyone access across the company to apply for job opening anywhere in the company.

Now, this seemed like an obvious example of what Martin Louthan had been looking for. A perfect example of the Power plant men being lied to by the Plant Manager. Our A foreman Marlin McDaniel asked Jim Kanelakos and I to apply for the jobs. He wanted to have actual proof that the applications would not be considered even though we met the minimum qualifications.

We applied, and our applications were turned down. We went through the proper procedures and up the chain of command and asked the Supervisor of Maintenance Ken Scott to have a meeting with us to discuss the situation.

Finally one day, at 4:00 we were told that Martin Louthan was at the plant and that he would be willing to meet with us. The end of our day was at 4:30. We went up to the conference room and sat down with Martin to discuss the issue. Ken Scott sat in the meeting as an advocate stating exactly what he had been told, and what had happened.

As 4:40 rolled around, I was aware that I had three people in the car waiting for me to drive them home, and I reluctantly had to leave the meeting right after Martin Louthan told us that he had never heard of such a rule that if you worked for the company you couldn’t be considered for a job. He asked to have Bill Moler and Eldon Waugh brought into the meeting.

The rest, I had to hear the next day because I missed the rest of the meeting. When Bill Moler and Eldon Waugh came into the meeting, Martin Louthan asked Eldon Waugh why he didn’t consider anyone at the plant for the new testing jobs, Eldon replied by saying, “We did consider people at the plant.” Then Bill Moler replied, “No we didn’t.” Martin asked, “Well why not?” (Maybe with a little more flowery language than I am using). Bill Moler said, “Because you told us not to.” Martin then said, “No I didn’t!” Bill Moler responded by shrugging his shoulders and saying, “Then it must have been a misunderstanding.”

That was it. The meeting was over. The misunderstanding was cleared up, but by that time the new testing crew had already been hired, and it was all water under the bridge. The Labor Crew men were still stuck digging ditches and doing coal cleanup. Martin Louthan didn’t have anymore meetings with just the Power Plant Men without the management in the room after that.

Every now and then I wonder what Jan was really writing in her notebook whenever Martin said, “Take a Note Jan.” I do know that after the first meeting, we were allowed to fish at the discharge, but only if we wore our hardhats. Our families and friends however could not. Then after much back-and-forth with Oklahoma City it was decided that not only did we not need to wear our hardhat while fishing at the discharge, but we could even bring our family and friends with us as well.

Martin Louthan retired with the other Power Broker men in the 1987-88 downsizing. The next June during the summer of 1988, Jan Brady became known as Janice Louthan, as she had married Martin Louthan. Martin’s first wife had died in 1981.

Martin lived 23 years after he retired from the Electric Company where he had worked for 40 years. He died in his home on November 29, 2010. Janice was most likely right there by his side. In my mind with her notepad handy, ready and willing to hear the words, “Take a note Jan” just one more time.