When I say that Bud Schoonover is known as “Elvin”, I don’t mean to imply that he was Elvin in nature.  What I mean to say is that he did not necessarily possess the qualities of an elf.  Well, except for his smile, which is somewhat Elvish-like.  Bud’s smile was usually more like a look of warning for those who didn’t know him well.  I have always said that he reminded me of a six foot, 5 inch tall, white Aunt Esther from Sanford and Son, and about 75 to 100 pounds heavier.

Aunt Esther from Sanford and Son smiling like Bud Schoonover

What I mean by saying that Bud is known as “Elvin” is that is what his Mother called him when he was born.  Though somewhere along the line he became known as Bud;  Not from his middle name… because I think that was Floyd.  Bud was my good friend and carpooling buddy (See the post “Carpooling with Bud Schoonover“).  Maybe that was why people called him Bud.  Because he was everyone’s “buddy”.

I don’t mean to make it sound like Bud has passed away, because as far as I know, he is still an active Republican voter living on South Palm Street in Ponca City.  I also don’t want you to think that I was only friends with Bud Schoonover because he was a good carpooling buddy.  No.  Bud had all sorts of talents.  He gave great weather reports each morning when we would gather to take our trek to the Power Plant some 20 miles away, as I mentioned in the other post about Bud.

I don’t think that there was anyone at the coal-fired power plant in North Central Oklahoma that didn’t like Bud.  There was just something naturally likable about him.  Bud worked in the tool room and the warehouse ever since the day I first arrived at the plant in 1979. — Well, the warehouse wasn’t much of a warehouse back then.  It just had stuffed piled up against the walls.  No shelves, No storage racks.  No drawers and bins full of parts.

He will be 76 years old this January.  Needless to say, Bud retired from the Power Plant in 1994 after having just turned 55.  At his going away party, some guys at the plant fixed up a Wal-Mart shopping cart with a bunch of accessories attached to it so that he would be properly equipped when he went to work at Wal-Mart as a Greeter. — For those of you who don’t know…. Wal-Mart used to hire elderly people to greet people when you walked into the store.  They might pull a cart out of the stack of carts and give it to you if you looked like you were in need of a cart.

Bud was extra careful when working in the warehouse.  He wanted to make sure that he was getting everything right, so he would check, and double check, and then check again…. just to make sure everything matched.  One good example of this was when he was tasked with ordering a half set of coal burner nozzles and tips for the boiler.

There were 24 of these Coal burner nozzle and tips in the boiler.  the nozzles costing about $13,000 and the tips ran somewhere around $4,000 each. 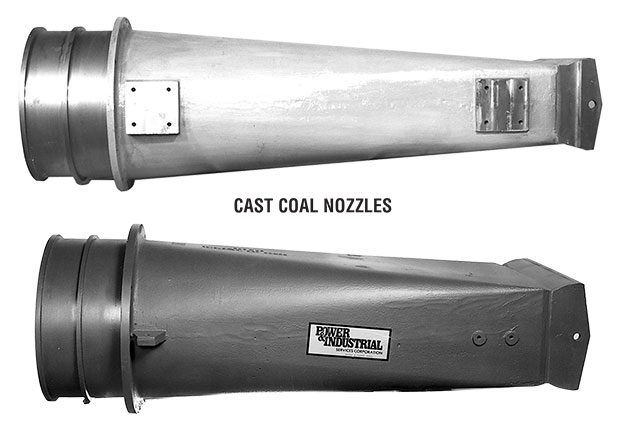 There was another assembly that attached to the end with the hole on the side that allowed the nozzle to change the pitch it was called the Tip.

So, Bud wanted to make sure the created the order correctly.  So, when Bud placed the order with the supplier, he not only included the Supplier’s part number, but he also included the manufacturer’s part number.  Just to make sure they knew they were sending the correct part, he even sent them the old manufacturing part number that they used a few years before they changed their part numbering system.  — So, when he sent the order, it had all three part number for the 12 nozzles.  He did the same thing with the smaller piece for the end of the nozzle.

I think I know how Bud must have felt when that happened.  Probably the same way I felt the morning I was summoned to the front office to pick up my mail, only to find a stack of a couple hundred envelopes from all over the company after printing something out on all the printers in the company (See “Power Plant Customer Service Team Gone Wild“).  I think Bud took these things in more in stride than most people might.  His reaction to finding out that the order he had created for $156,000 had suddenly turned into $468,000 was probably something like…. “Oh Geez.  I sure don’t want to do that again!”

During the “We’ve Got the Power” program (see the post “Power Plant We’ve Got the Power“), the HR and Warehouse director, Linda Dallas asked us if we would put in a proposal to scrap the extra nozzles since these nozzles were very big.  She didn’t think it would look good if her own team created the proposal since she was already responsible for the warehouse.  We had two people from the warehouse on our We’ve Got the Power team, Dick Dale and Darlene Mitchell, so she thought we could do something out the conundrum.  Two nozzles fit on a pallet, taking up space all over the warehouse.

The nozzles with the Tips attached

We could save money just by scrapping it because we wouldn’t have to pay taxes on the parts.  It cost too much to return them to the supplier because the restocking fee was too high. — And E-Bay didn’t exist back then.

Instead of accepting our proposal, it was decided that instead of just changing out half of the nozzles during the next outage, they would just replace all of the nozzles.  This reduced the number of nozzles left in the warehouse to a more manageable number.  So, Bud’s Faux Pas, may have just helped increase the efficiency of the boiler significantly with the replacement of the nozzles which may have translated into savings of unknown millions of dollars, of which Bud received no credit… But that’s okay.  Bud wasn’t one to seek credit for his ingenious accidental idea of triple ordering boiler Nozzles.

One of the favorite stories I would tell my children as they were growing up when they would ask me to tell them a Bud Schoonover story was the story about the last tool in the tool room.  — This is Bud’s own special way of handling the restocking of the tool room.  It goes like this….  For instance….

“I can’t give you a yellow flashlight, because I only have one left.”  — You may want to respond with something like, “But Bud, if there’s one left, then why can’t I have it?”  Bud’s reply would be, “Because if I give you the last one, then I’d have to order more.”

At this point, you may want to start over asking if you can have a yellow flashlight, with the hope that Bud may have forgotten that he was down to his last yellow flashlight….  You might even phrase it a little differently… You might say something like, “Well… Can I just borrow a yellow flashlight for a few hours?  At least for as long as I have to do some work in the dark?” — I have seen this approach almost work.  He would stop and think about it like Andy Griffith in “No Time For Sergeants” trying to answer questions being asked by the Psychiatrist:

Andy Griffith talking to the Psychiatrist in No Time for Sergeants

Then the next question you may ask (I know, since I asked it more than once) is: “So, Bud, how about ordering some more yellow flashlights.”  Bud would reply with something like, “No.  I don’t really want to order anything this week.”, as he nods in the direction of the computer monitor sitting on the desk just to his left…  — Oh…. computer shy…. that’s why.  Not comfortable ordering stuff on the computer (especially after ordering all those coal burner nozzles).

I can understand that.  He is the same age as my own father, and my dad at that time would literally call me at least one time every single day to ask me a computer question.  Like…. “How do I move a paragraph from one part of a document to another part?”  — “Um… Yeah Dad, (for the hundredth time), you do it like this….”

There’s something about every one of my friends and family that were born between December 30, 1934 and January 27th 1939.  They all had the same problem with computers.  Must be that particular generation born within thatfour year period.  I’m sure Elvis, who was born right in the middle of that time frame (on January 8, 1935), would have had the same trouble with the PC if he had lived long enough.  — I know… I know…  I just saw him the other day myself.

Only he had gained some weight

Anyway, there was one sure fire way to get that tool that I needed from the tool room while Bud Schoonover was manning the front gate, and that was to volunteer to go to the warehouse and pick up a box of the parts yourself and carry them back and hand them to Bud, while taking one out for yourself.  — And the time I needed a flashlight, I did just that.

One time I went to the tool room in the middle of the winter when we had water pipes that were frozen and I needed a propane torch to heat the pipe to melt the ice.  Bud told me that he couldn’t give me a propane torch because he only had one left.  I looked up two racks over from the gate and could see at least two boxes of propane bottles on the top shelf.

I told Bud that I wouldn’t be taking his last bottle of propane, because there was at least two bottles right up there on that shelf.  Bud insisted that he only had one bottle of propane left and he couldn’t give it to me.  So, while smiling at Bud and explaining that I could see the two bottles right up there on the top of the shelf,… with one hand on his shoulder (which was about a whole foot taller than my head), and the other hand unlocking the gate, I told him I would show him.

So, I stepped into the tool room, and said, “It’s ok Bud, I won’t take your last bottle of Propane, but I do have to take this bottle here, because we have a water pipe that is frozen solid, and I need to use the propane torch to warm it up.  Here… I”ll just take this one, and you can keep this other one here….” 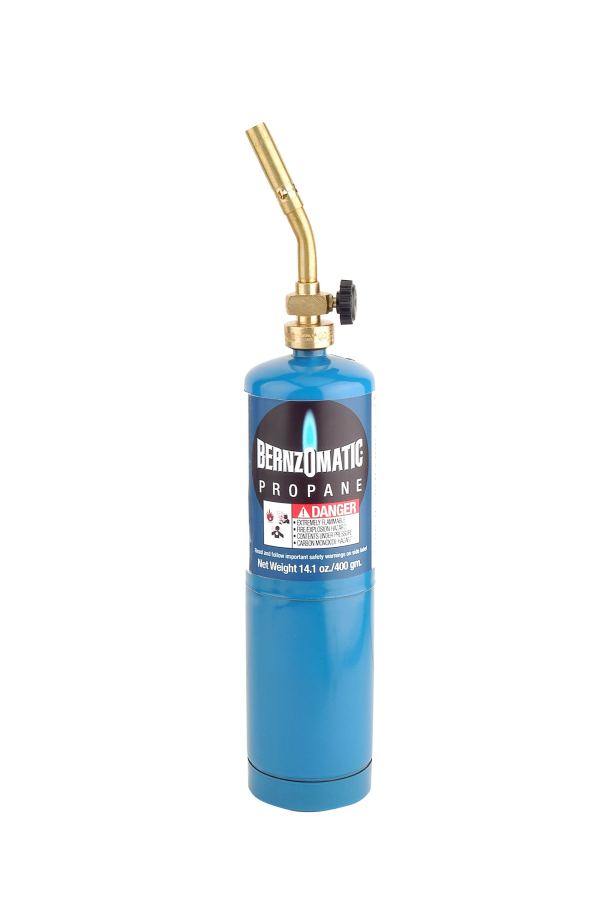 As I walked back out the tool room smiling all the time at Bud, who was just staring at me with a worried look finally lowered his shoulders which had been creeping up closer to his ears as I had sidestepped him to get to the propane bottle.

The funny thing was that by the end of the week, there would be a whole list of parts and tools that only had one left in the tool room.  Bud would consider it a successful week if he could make it through the week without having to get on the computer and order some more parts.  He knew that next Monday, when Dick Dale

arrived, they would restock the shelves, and he would be in the warehouse filling the orders and bringing them over on a two wheeler to the tool room.  And the world would be right once again.

Since originally posting this post, Bud Schoonover had joined Dick Dale in the warehouse of Paradise.  See the post:  “Dynamic Power Plant Trio – And Then There Was One“.  Here is the latest picture of Bud: