Originally posted November 15, 2014.  I added an addendum at the bottom of the original post:

John Fry had a peculiar way of standing in front of the bathroom door in the electric shop after he had mopped the bathroom floor as he waited for the floor to dry. It was as if he was a sentry on duty in front of the Buckingham Palace in London because he would stand so still. I would amuse myself by picturing him dressed in the red Beefeater uniform standing at attention at the bathroom door at a coal-fired Power Plant in North Central Oklahoma. 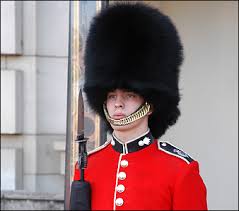 Only John wasn’t carrying a rifle, he was holding his broom handle. He would hold the handle of the broom so that it was parked just behind his right ear. His head would be slightly bent forward and the expression on his face was one of deep thought. John didn’t speak much. I wondered if he had ever been a guard or a soldier. It would have had to been during the Vietnam War if he had given his age. He was born in 1947.

I always admired John who was doing the job I used to do when I was a janitor at the plant when I had first become a full time employee after four years of working as a summer help. Like the tourists in London, I would do subtle things to try to distract John from his stalwart sentinel position without actually talking to him. I didn’t think would be fair to actually use words, because John, being the polite person that he was would break out of his guardian stance to say “Hello” or answer a question if I had posed one.

One day while John was standing watch over the wet bathroom floor, I silently came up alongside him with my own broom and I put the handle behind my ear just like him and tried to stand with the same interesting posture John used. I stood there for a few minutes waiting to see if John would respond to me. There was something peaceful about standing next to John meditating on the water evaporating from the tiles behind us. The wooden handle placed behind the ear, pressed up against the side of the head added a sort of stability.

He just continued standing watch. He may have had a slight smile, I’m not sure. When John smiled, it was usually very subtle. It was more in the eyes than on the mouth and since I was only looking out of the corner of my eye, I couldn’t really tell. I didn’t wait until the floor completely dried before I left. I still had to be an electrician, and I only had a few minutes to spare before I had to continue on my way.

The other interesting feature about John was that he didn’t turn his head. It was as if he was wearing an invisible neck brace. So, when he walked by, if you said “Hi John”, he might put up one hand as a slight wave, and mutter “Hi” back, but he wouldn’t turn his head toward you, unless he happened to be coming straight in your direction. He was generally looking at the floor a few feet in front of him when he walked. He would walk sort of hunched over as if he was looking for a small lost item on the ground.

I took this to mean that John had some sort of surgery on the vertebrae in his neck that fused them together so that they were immobile preventing him from looking this way or that. He was built like a boxer and looked the part, so I would imagine that in his earlier days, John was in a boxing ring exchanging blows with someone until he had to stop because of the injuries to his spine that could only be mended by fusing his neck into a permanent position of a Buckingham Palace Guard.

It was a pastime of mine to imagine what the Power Plant Men did before they ended up spending their days creating electricity for half the state of Oklahoma. That was until I had the opportunity to ask them and find out what they really did. As I mentioned, I pictured John Fry as a boxer before he became the bathroom Beefeater.

I pictured Johnny Keys as being someone who lived in the Arkansas Ozarks making Mountain Dew from a still up in the hills before he became a machinist. 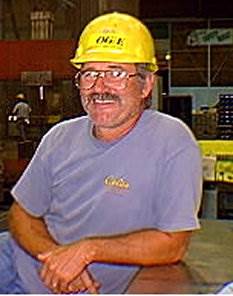 You would understand that image better if you had seen him before they disallowed the wearing of beards on the plant ground. When Johnny had a beard he looked more like this: 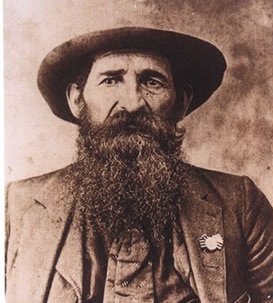 Like this, only younger and with a shorter beard

I don’t even want to mention the number of Power Plant Men I pictured as used car salesmen before I knew them better. Ok. All right. I won’t tell you their names, but one of them has the initials: “Gene Day”.

There were a number of Power Plant Men that looked like they were Sergeants in the Army or Navy. Some that come to mind are 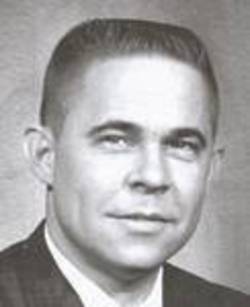 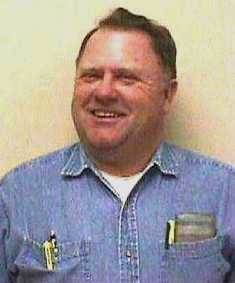 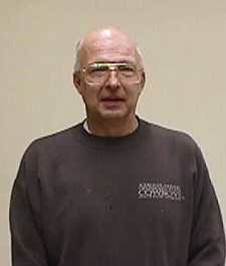 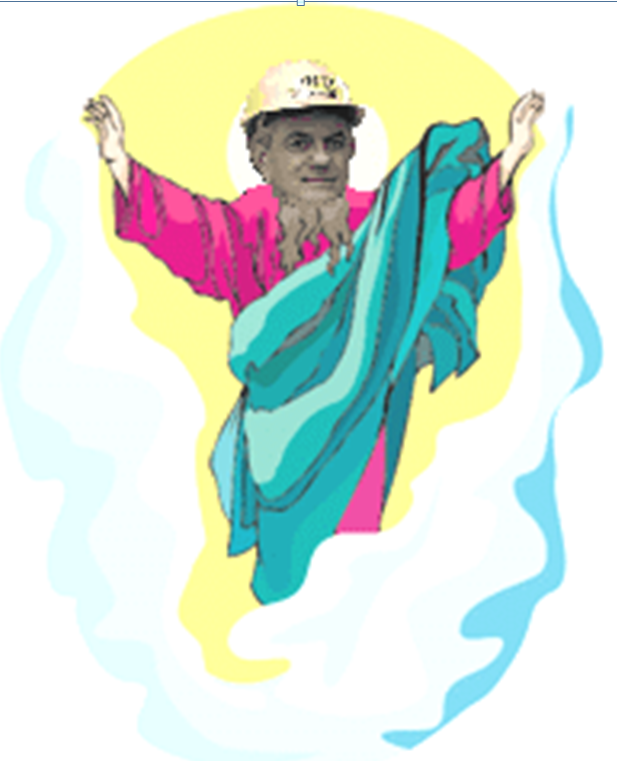 Then there is the group of Mad Scientists. You know the type… They look so normal, but you can tell that in their spare time they are playing with chemicals, or coming up with new Physics equations in order to puzzle those fortunate enough to take a college Physics course….

Before I knew what this group actually did for a living before they arrived at the plant, I immediately thought…. Mad Scientist: 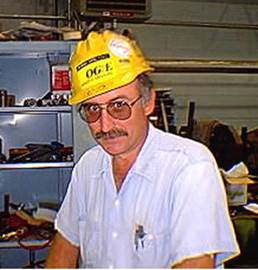 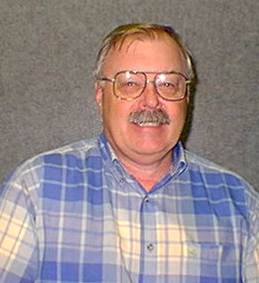 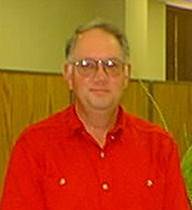 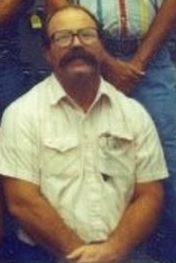 Then there was the group of people that looked like they were in a Hard Rock Band. They were easy to categorize since they all wore dark glasses…. Or maybe they did that because they worked in the welding shop… 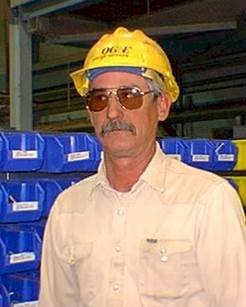 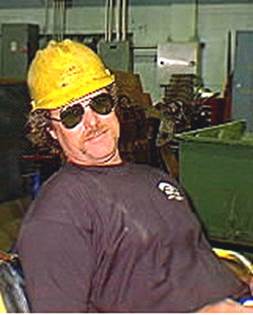 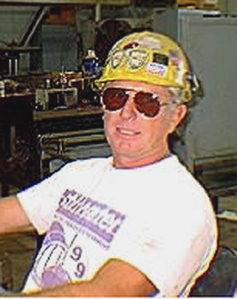 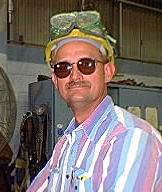 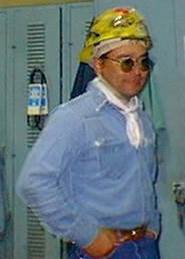 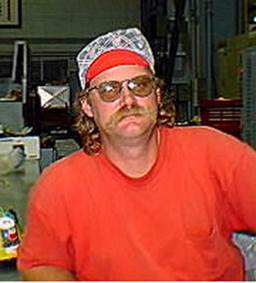 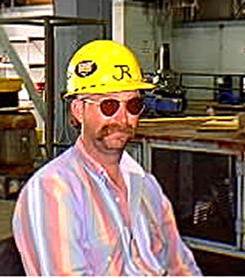 Rod (Junior) Meeks stumbling around in the background

Ok. Maybe in their spare time, they also doubled as a biker gang.

Then there was the more simple jobs… For instance, Danny Cain probably worked in a donut shop (which coincidentally… I did): 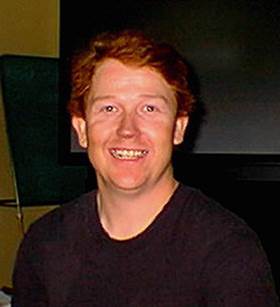 Then there was the all around nice looking guys who would serve you in a restaurant or bag your groceries like Mike Gibbs:

or Brent Kautzman that reminded me of one of those guys that modeled fancy shirts in a J.C. Penny’s Catalog: 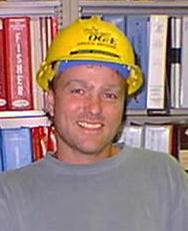 Ok…. I think you get my point…. Sort of like the songs I would hear whenever I was around these guys like I had discussed in the post “Power Plant Music To My Ears” I also categorized the Power Plant Men into various previous jobs… Larry Riley used to say that it was a good idea for me to not be idle because when I was, I would come up with the goofiest (my word, not his) things to do. I suppose he was right.

Anyway, I want to get back to John Fry. You see… my thought about John being an ex-boxer that could no longer box because of a neck injury gave me a sad feeling when I looked at John. I never really knew if he was married, though I didn’t think so. I knew he had a younger brother that lived in Stillwater, while John lived in Ponca City. Besides that, John’s life was a mystery to me.

So, today when I decided to write about John, I looked him up online to see what I could find. I found that he had died at the age of 58 years old on May 10, 2006 while working as a Warehouse Inventory Clerk. I couldn’t find an obituary. It seems that the Trout Funeral Home that handled his funeral either didn’t keep records that far back, or they just didn’t have anything to say about it.

I learned that the Sunset Baptist Church had a service for John but I couldn’t find anything about his funeral there either. Actually, I couldn’t even find the cemetery where he was buried. There is one John Fry in the IOOF cemetery in Ponca City, but I am not able to tell if that is him or not. It seems to me that John, whose brother had died 4 years earlier may have been alone.

I wish I knew more. Maybe someone at the plant can fill me in. Maybe I have the wrong John Fry and John is still around.

As a terrific Power Plant Man Janitor who held his post each day while the floor was drying, I want him to receive the honor that he deserves. I want him to know that there is a group of men that honored his service and respected his life. If I had his picture, I would display it here. The only picture I have is the one I carry in my memory.

About two weeks after I wrote this post last year, John Fry’s daughter Amy ran across this post and left a comment.  I have included that below: