What Happens When Power Plant Gremlins Bite Back

I suppose many of you have seen the movie Gremlins that came out in 1984. It’s a story about a creature named Gizmo who is a Mogwai that becomes a pet of an unsuspecting young man, who inadvertently breaks certain rules that were explained to him in specific detail. The first rule was Don’t get the Mogwai wet…. The second rule was Don’t feed a Mogwai past midnight. — There was another precaution, like Mogwai do not like Bright Lights. The Mogwai is a cute little pet designed to sell toys, and I think it was probably pretty successful.

When a Mogwai get wet, it pops out some fur balls that then turn into other Mogwai. You would think this would be good, but when the boy accidentally spills water on Gizmo, the new Mogwai turn out to be mischievous, where Gizmo is friendly and has a nice smile. The new Mogwai trick the boy into feeding them past midnight. This is when the trouble really begins. The cute fuzz ball Mogwai turn into Gremlins:

Gizmo from the movie Gremlins

Stripe from the movie Gremlins

Can you guess which one is the Gremlin?

So, what does this have to do with Gremlins in a Power Plant? As it turns out something like Gremlins live in Power Power Plants. I know they did at the Coal-fired Power Plant in North Central Oklahoma where I worked as an electrician. Sometimes when you least expected it, a Gremlin would jump out and bite you.

A P&H Crane, just like the one at the plant

Just think about it. Operating something with so much power and the ability to do so much work by just pulling a few levers and pressing a couple of petals, flipping a few switches. Not many people at the plant were privileged enough to have the opportunity to operate the P&H Crane. So, when Stanley asked Hank to lift that load and tote that bale, he hopped right to it.

Unfortunately, Hank didn’t realize when he climbed into the cab of the crane that the little Mogwai sitting in the seat next to him had been eating after midnight the night before…. One little pull of the wrong lever at the wrong time, and a little distraction that caused Hank to forget to put his outriggers out before trying to lift his heavy load, and the crane flipped over on its side. 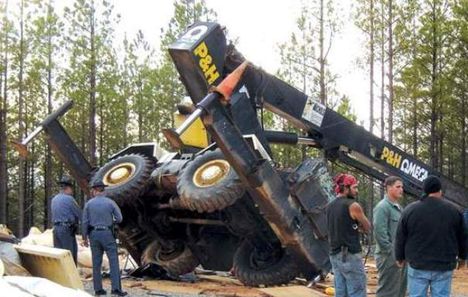 Like this crane I found on Google Images except our crane was laying all the way over on it’s side, but you get the idea

I wonder if Hank noticed the Gremlin jumping out of the cab just after that happened, or was he in too much of a state of shock. Though Hank appeared all right after that incident, he had injured his back in a way where he eventually had to leave permanently. I know that many years later after he left, he was still collecting a pay check from the company. Compliments of the Gremlin.

One day RD (Dick) McIntyre, Dale Mitchell, Don Timmons and George Alley were working underneath one of the four Intake Pumps, also known as the Condenser Water Pumps. These are the large water pumps that push the lake water through the condenser in order to cool the steam so that it can make another round through the boiler and end up turning the turbine once again. I believe each of these pumps can pump something like 189,000 gallons of water per minute. — One of the Power Plant Men at the plant can correct me if I’m mistaken. 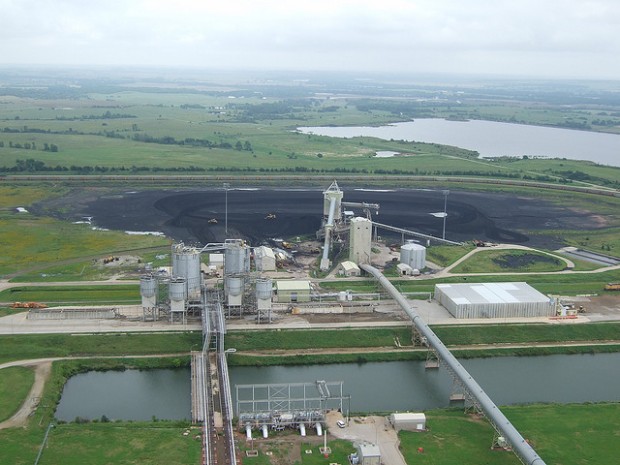 This is a view from the smoke stack. The four Intake pumps are at the bottom center

The crew was putting the coupling back on the pump if I remember this correctly…. and they needed to rotate the rotor of the motor or the pump in order to line it up or check the alignment. I wish I had a team picture of these four men, because they were the nicest bunch of old men. Especially when you were able to catch them all together. It seemed like the energy of their friendship made their group larger than the sum of the individuals. I’m sure while they were working on this job, all sprawled out underneath the pump motor, they had warm cuddly feelings just as if each of them was petting a Mogwai.

That’s when the Mogwai suddenly turned into a Gremlin. The team had put a strap wrench around the rotor (correct me if the details are wrong Mickey. You would know better than I) and were attempting to rotate the rotor. Dale Mitchell told me later that suddenly something slipped and the handle of the strap wrench swung around and smacked Dick McIntyre right in the forehead. Dick and Dale were just about as inseparable as Dick Dale was with his first and last name, so you can imagine how Dale felt that he had injured Dick.

Here is an interesting coincidence…. Dick Dale worked in the warehouse across the drive from the automotive garage where Dick and Dale (McIntyre and Mitchell respectively) worked, which was where the crane had tipped over with Hank Black in the driver seat. — I could stretch the coincidence to David Hankins, who used to drive a Black Trans Am. I would have mixed up David Hankins and Hank Black, because of David’s Black Trans Am, but David died in an auto accident early in 1980, and I don’t think Hank had arrived until shortly after. Racially, David Hankins was Black, and Hank Black was not. He was Native American. Anyway. I digress (which means… I have strayed from the topic of Gremlins).

When I think about Gremlins at the plant, Yvonne Taylor comes to mind. Not because she reminds me either of a Mogwai or a Gremlin, but because she encountered a Gremlin of sorts that sort of had a similar effect of spilling water on a Mogwai. I have recently reposted a story called “How Many Power Plant Men Can you Put in a 1982 Honda Civic” where I talked about Yvonne Taylor, one of the Chemists at the Plant.

Yvonne Taylor had worked as a Chemist at the plant since around 1980. We carpooled while I was a janitor and on the labor crew, almost until I joined the electric shop. So, I knew her pretty well. She liked to talk a lot, so I knew her a lot better than she knew me. As a chemist, she worked in the water treatment plant testing water quality, as well as testing our sewage treatment pond, and ground water, etc. She worked with a lot of different chemicals.

I was always fascinated with the chemistry lab. I had my own chemistry lab set up in the basement of our house when I was young. My dad would bring home different left over chemicals from work, and I would mix them, heat them, and light them on fire, and test their chemical properties… to the point of making gunpowder and exploding them in the backyard.

I think Yvonne had worked at the plant about 10 years when she developed a rash (or something) where she would become ill when working in the lab or in the water treatment plant. It was serious enough that Yvonne would have to take sick leave at times to recover. I first learned about her condition when I went to the chemistry lab for something and she was sitting in there wearing a paper filter mask. When I asked her why, she explained to me that she was trying to figure out what was causing her to become ill. She thought there might be some particles in the air in the lab or the water treatment plant that was causing it.

I think that the effects of Yvonne’s condition sounded a lot like what happens when someone develops an allergy to Latex. Yvonne would wear Latex gloves a lot when handling chemicals, so maybe that was it.

The sad part of the story is that Yvonne’s condition was severe enough that she had to leave the Power Plant and find another job. I don’t know where she went to work when she left the Electric Company. So, you see, Yvonne Taylor who happily went to work each morning ready to cuddle up to her chemicals just as if they were Mogwai, was finally chased away by Power Plant Gremlins.

In the post about the Honda Civic I mentioned that Yvonne’s husband Patrick had died in 2012. So, I wondered how Yvonne is doing lately, so I Googled her, knowing that she lived out in the country near Perkins Oklahoma…. But an interesting thing happened when I pulled up a page from the Perkins Journal for June 9, 2011.

I became confused when I saw this page. You see, the picture in the middle at the top is Mike Rose. He was an electrician I had worked with at the Power Plant, and I had recently re-posted a story about him called “River and Rose In the Power Plant Palace” Mike Rose had his own set of Gremlins which I may have mentioned in that post, but why, when I searched for Yvonne Taylor, did I pull up the a Newspaper Obituary of Mike Rose with the same picture of Mike I had posted in my post:

Talk about a Coincidences:

I read through the entire page before I found Yvonne’s name in a totally unrelated article on the same page of the Perkins Journal! Look in the lower right corner of the screenshot of the newspaper. The picture of Kimberly Jo Taylor Wilkins. — Yep. That’s right! The daughter of Yvonne and Patrick Taylor! I don’t know how may hundreds of stories I heard about Kimberly throughout the 9 or 10 months I spent carpooling with Yvonne each morning as we drove to the Power Plant. Here she was beginning a new phase in Kimberly’s life on the same page that Mike Rose was beginning a new phase in his life. Two unrelated stories of Power Plant People I worked with on the same page of a small town newspaper (Perkins Oklahoma, Population 2,863) 10 years after I left the plant to go work for Dell. — Isn’t that neat?