If I were to create a list of each time a tragedy occurred in the life of the Power Plant Men and Women of our plant, it would be quite long.  Most of the tragedies go unnoticed because when a Power Plant Man enters the front gate, an attempt is made to leave the rest of the world behind so that their full attention can be focused on returning home safely at the end of the day.

Just as in a small town like Mayberry (from the Andy Griffith Show), everyone knows everyone’s business in a Power Plant.  This was true when I worked as an electrician in the coal-fired Power Plant in North Central Oklahoma.  There were some people you were closer to than others, but whenever there was a tragedy in anyone’s life at the plant, everyone felt the pain.

In everyone’s life, there is always a loss of loved ones.  This is expected in most cases.  When someone’s Mother died, we knew that a certain amount of grief would be felt.  Those weren’t “tragedies” per se, unless the death was unexpected or caused by an accident.  Power Plant Men know that death is a part of life.  They would be there to comfort each other during those times.

The most devastating tragedy that one can imagine is the loss of a son or a daughter through a tragic accident.  In this post I will focus on two times when I worked at the Power Plant when True Power Plant Men lost their sons through a tragic accident.  I bring up these two events because I wish to share the grief that was felt by the entire community at the time.  I think this is important because times like this help define the character of everyone involved.

Ron Hunt was born November 2, 1948.  He graduated from Ponca City High School in 1966.  He had a number of jobs before being hired in 1981 at the Power Plant as a mechanic.  After working at the plant for almost 20 years, one day his crew had to work late into the night to repair the Number 2 Conveyor Belt. 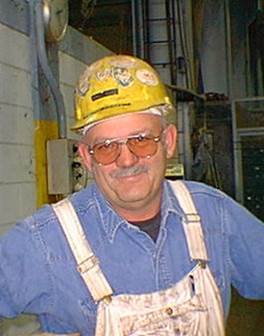 Some time around 2 am, when the work was almost done, the counterweight for the belt that weighs at least 5 tons, that had been welded in place to keep the weight off of the belt while they were working on it, was being cut loose in order to put the belt back into service.  At this point the entire crew had been working for over 18 hours without much of a break.

Because of this circumstance, the weight fell to the ground with Ron standing on top of it.  As it fell, Ron scraped his leg causing a serious gash down the side of his leg.  He was rushed to the hospital, where after a couple of months he was able to report back to work at the plant.

Not long after Ron Hunt had returned to work, one afternoon, his son was driving a Coca Cola Truck, or some other beverage truck from Ponca City down Highway 177 toward Stillwater.  About 5 miles after passing the plant where his father worked, as he was approaching the railroad tracks that go through Morrison Oklahoma, a train suddenly appeared from behind the tree line.  The lights on the railroad crossing turned on and the arms began to lower.

As most Power Plant Men that lived south of the plant knew, whenever a train was approaching that particular crossing, the warning light and the arms didn’t start coming down until the train was almost at the crossing.  Many of us had the experience of trying to come to a fast halt when suddenly the light turned on while we were within 100 yards of the tracks and a train suddenly appeared from behind the trees.

This is what happened to Ron Hunt’s son that day.  The truck was not close enough to the tracks to avoid hitting the crossing arms that suddenly dropped down, and was too close to the tracks to stop a truck full of product.  Skid marks were left where the Ron’s son had desperately tried to stop the truck in time.  Unfortunately, he was not able to stop before crossing the railroad track directly in front of the train.  He was killed in a fiery crash as the engine of the train derailed.

Jim Kirkendall worked in the Coalyard from the first day he arrived at the Power Plant, March 19, 1979.  This was just a month and a half before I showed up my first summer to work as a summer help.  The plant was still under construction, so I met Jim when I would go to the coalyard to work with Gary Michelson or Jerry Mitchell when we were filtering all the oil in the plant through the blotter press.

An Oil Blotter Press Similar to the one we had

Jim has red hair and reminded me of an English detective, much like Philip Jackson who played Inspector Japp in the British TV series “Poirot”:

Jim Kirkendall experienced such a tragedy one day that the entire plant was stunned into sorrowful silence when they learned what happened.  The day was June 10, 1998.  When his son was late coming home that day in Morrison Oklahoma, Jim went out to look for him in the pasture where he had been baling large bales of hay.

As Jim approached looked out over the pasture, he could see the tractor with the baler attached, and the bale of hay that was still attached was on fire.  As Jim quickly approached the baler, he found that his son Jim Aaron had been caught in the baler and had been baled up in the round bale that was on fire.

I don’t know how anyone can remain alive after coming across a scene where your very own 17 year old son has been killed in such a way.  I think the grief alone would have been so suffocating that I would have died right there on the spot.  Somehow Jim survived this experience.

I bring up both of these tragic events today, because in order to understand the bond that exists between the Power Plant Men and Women who have worked side-by-side at a Power Plant for many years, it helps to know that when tragedies like these occur, the entire group of Power Plant Men is changed.  Even though the events themselves are tragic, the resulting change in the character of the plant is improved.

Times like these have taught the Power Plant Men and Women who they really are inside.  It turns out that they are all men and women of great compassion.  They joke about it at times with Safety stickers like this: 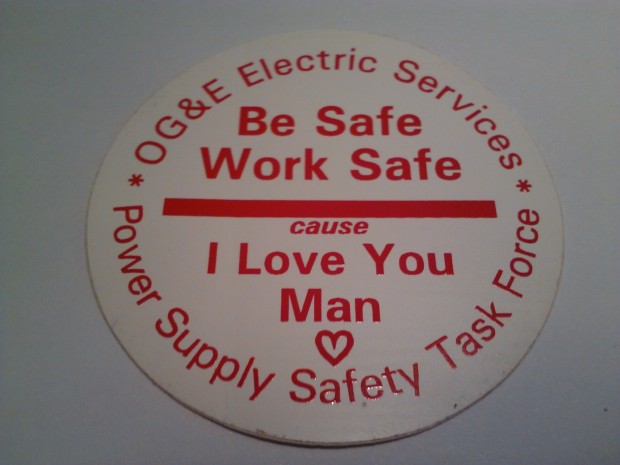 ‘Cause I Love You Man!

This hard hat sticker expresses the bond that exists within the Power Plant family more than it was originally intended.  After Randy Dailey gave me a stack of these a few years after I left the plant, I have kept these stickers handy to remind me of that bond.

I was reminded of this bond this past week when Ben Davis reached out to me to let me know that Ray Eberle’s wife Barbara passed away the previous Friday.  I knew that Barbara was very ill, and that Ray has been by her side almost constantly for the past year caring for her, so I was not surprised by the news.

Ray’s nickname for me is “little buddy”.  I follow his family on Facebook and up until the very end when Barbara was very sick, whenever she would post something on Facebook it was very positive.  A proud grandparent.

I left the plant over 14 years ago.  Yet, what happens in the lives of my Power Plant Family is just as important to me today as it was the day I left.

I know that Ray grieved when Barbara died, but I also know that he had a feeling of joy at the same time.  His wife Barbara had been struggling with her health for a long time.  Ray knows that now her life is finally fulfilled.  No more pain.

Ben Davis sent me an e-mail shortly after he learned about Barbara.

Not because I asked him to keep me informed about Power Plant News.  He told me what happened because we are part of the same family, and we share each other’s joys and sorrows.

Even though Ray has been retired for the last few years, he is still as much a part of the family as I am, and I have been gone for 14 years.

I suppose some day in the not too distant future, everyone I know from the Power Plant will have retired or passed away.  Some day there will even be a video online of the entire plant being destroyed as it is bulldozed under to make way for newer technology.  The lives of these brave Power Plant Men will not be forgotten.

The lives of the Power Plant Men are etched into eternity.  Not because they pushed countless electrons down wires to light up houses, but because of the bond that exists between them.  Because the love that Power Plant Men and Women have for each other is the type of Love that comes from God.

As a follow up to this post (as this is a repost); this past summer (July 18, 2018) I visited the the small town of Morrison.  Because I had heard so many stories about the Morrison Cafe I thought I would stop there to eat dinner.  I sat on a stool at the counter and ordered my meal.

A few minutes later an older man approached me.  He had a gray beard and a wrinkled face.  He said, “You’re Kevin Breazile.  Aren’t you?”  I looked at his face and it seemed familiar.  I had seen those eyes so many times before.  Flashing through my Rolodex of Power Plant faces, I finally matched the eyes with the man.

I said, “Jim!  Jim Kirkendall!”  He asked me what I was doing there and I told him I was just passing through and stopped by the Morrison Cemetery to visit some old friends.  We said a few more words and he went to sit with 3 other old men at a table by the door.

When I was ready to leave to go meet with my other old friend Ray Eberle who had just pulled up outside, I told the waitress that I would like to pay Jim and his friend’s bill for dinner.  That was my parting gift for Jim, who has been in my heart all these years.