I was five years old the first time I witnessed a shootout between two people the summer of 1966.  One person was a law enforcement officer and the other person was apparently a criminal.  The criminal who had run out into the middle of the street decided to stand his ground and turned around to face the Sheriff who had been calling to him to stop… “In the name of the law” I think he said.  They paused for a moment, and then in a flurry of bullets the criminal fell to the ground.  The crowd that had gathered around in that brief moment clapped.

I had never seen a dead body before that day.

The scene I had witnessed happened on the north side of Oklahoma City, just across I-35 from a restaurant called “The Surrey House”.  It was a famous restaurant in Oklahoma City since the mid 1950’s, known for having the best pies around.  We had traveled all the way from Stillwater Oklahoma to eat at this restaurant several times in the past 2 years before this incident occurred.

The Surrey House in the early 1960’s. Notice the great set of cars in the parking lot

That particular day after we had eaten, we took a short jog across I-35 to go for a stroll down a street that had a western feel to it, much like the stockyard area of Fort Worth, Texas.  At that time, this particular stretch of the Interstate Highway was different than any Interstate I had ever seen in my five informative years of existence.

You could pull off into the restaurant without taking a “formal” exit.  You could even cross the highway at a couple of places by just jogging across the center median and pulling off the side of the road directly into another place of business.

As a side note:

At This time this small stretch of highway was still referred to as Route 66.

As fate would have it, August 14, 1999, when my son was 4 years old and my daughter was 9, we returned to the same street where I had witnessed the shootout 33 years earlier.  The buildings were much the same, only they had a better coat of paint than when I was a child.  As fate would also have it, another shootout occurred very similar to the one I had witnessed as a boy.  The players were obviously not the same as before, but it did involve another lawman and another criminal.  The criminal ended up with his gun being shot out of his hand then he was dragged off in handcuffs.  Again, the crowd that had gathered clapped.

Here is a picture of the street where the shootout occurred:

The street where the shootout took place

When I was a child and we entered this small town across from the Surrey House Restaurant, this is what the entrance looked like:

Frontier City I visited as a child

When I returned with my children, here is closer to what it looked like:

As you can tell by now, I am talking about an amusement park.  As a child, it was more of a place where you just strolled around and looked at the western stores and the people dressed up in western outfits, who would occasionally break out into shootouts and play tunes on tinny pianos in mocked up saloons.

When we returned 33 years later, Frontier City had turned into a full fledged amusement parks with roller coasters and water rides.  It still had the occasional shootouts that would spill out into the streets when some Black Bart character would call the Sheriff out into the street for a one-on-one “discussion”.

I suppose you think I must have slipped off my usual “Power Plant” topic.  Actually, the day my children were standing there watching the shootout at Frontier City, all of the people standing with us worked at the Electric Company.  Frontier City had been closed to the public on August 14 (and 21) and was only allowing Power Plant Men and other Electric Company employees in the gate on those dates.

There was a sort of a rivalry within the Electric Company that I had found existed about 3 years earlier in 1996 when some lineman were at our plant from what might be called the T&D department.  This stands for Transmission and Distribution.  In other words, the department where the linemen and transformer people worked.

One of the linemen told me while we were working in the substation that the company really didn’t need Power Plants anymore.  When I asked him why, he explained that since Electricity is bought on the open market now, the company could buy their electricity from anybody.  It didn’t matter who.  The company didn’t need to own the plants.

Not wanting to start a “turf war”, I kept to myself the thought that the Electric Company that produces the electricity is the one making the money just as much as the one with the wire going to the house.  Do you think you can just buy electricity as cheap as you can from our power plants?  After all, our electric company could produce electricity cheaper (at the time) than any other electric company our size in the country.

So, when we were walking around Frontier City going from ride to ride, I half expected to see a mock shootout between a Power Plant Man and a Lineman.  Fortunately, I don’t think one incident of that nature occurred that day.  If you keep reading, you may find out why.

Some time in mid-July the employees of the Electric Company in Central Oklahoma received a letter in the mailbox inviting them to spend a day at Frontier City.  You might think this is a misuse of Electric Company funds to pay for the use of an amusement park for two days just for your employees…  After all, this came out of someone’s electric bill.

You will notice on the invite below that the company was thanking everyone for their hard work and long hours and for working safely through a difficult time.

My invitation for Frontier City

Wouldn’t you know I would keep a copy….

You may wonder what difficult time an Electric Company in Oklahoma could possibly face, and I suppose the first thing that comes to many people’s minds are “tornadoes”.  In this case you would be right.  We had a very trying year with the storms over Oklahoma that had ripped through Oklahoma City on May 3, 1999.

We call this a tragedy, and it was.  Over 3,000 homes had nothing but concrete slabs where their homes used to be, as an F5 tornado tore through populated areas in the Oklahoma City area.  Throughout all this destruction 36 people lost their lives.  This is a very small number considering the amount of destruction.

The evening of May 3 at my home outside Stillwater, Oklahoma when I had arrived home from work, I swept the bugs and dust out of our storm shelter, which was an 8 foot by 8 foot cube  with 8 inch reinforced concrete walls buried in the ground outside my bedroom window.  The top of it looked like a patio with a big stainless steel plated wooden door.  I stocked the storm shelter with some fresh water and snacks.

My wife was working as a Charge Nurse at the Stillwater Medical Center.  I remember sitting on the edge of the bed in my bedroom watching the F5 tornado entering Oklahoma City.  The tornadoes had traveled 85 miles from Lawton Texas, growing as they moved across the state.

As the tornado tore through large residential areas in Oklahoma City I called my daughter, Elizabeth (Ebit) into my room and with tears in my eyes I told her we needed to pray for the people in Oklahoma City because this tornado we were watching on TV was destroying hundreds of people’s lives right before our eyes.

Less than an hour later we entered our own storm shelter as another F5 tornado was within 5 miles of our house.  My wife, Kelly was still at the hospital moving patients to safety in the basement where we had taken shelter from tornadoes when we lived on 6th street.

We spent that night going in and out of our storm shelter as tornadoes passed close by.  The F5 tornado that came close to our house took out the High Voltage power lines coming from our Power Plant to Oklahoma City for a 10 mile stretch.

There were a total of 74 tornadoes that night in Oklahoma City and Kansas.

The Electric Company was scrambling to supply power to a city that had been crippled by a tornado 5 miles wide.  We still had one high voltage line on the 189 KV substation intact where we could funnel electricity to the rest of the state that still had an intact transmission system.

The Oklahoma Electric Company had more experience with tornado damage than any other company in the country.  They often donated their time helping out other companies in their time of need. 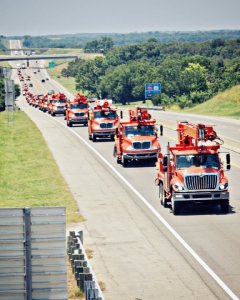 With the help of electric companies from nearby states, electricity was restored as quickly as possible.  The men and women who work for the Electric Company in Oklahoma are the real heroes of the wild west.  It is the lineman that is called out in an emergency like this.

Linemen work until the job is complete when an emergency like this occurs.  Sometimes they are on the job for days at a time, resting when they can, but not returning to the comfort of their own bed until power is turned on for the Million plus customers that they serve.  The lineman had completed their work repairing this natural disaster without any serious injuries.

That day at Frontier City, the heroes of the day were the T&D crews that spent a significant part of their lives working to repair the damage caused by these tornadoes.  Even though there may have been some sort of rivalry between T&D and Power Supply (that is, the Power Plant employees), any Power Plant Man that came across one of the T&D linemen that day at Frontier City, tipped their hat to them (if not literally, then through their expression of gratitude).

As grateful as the Power Plant Men were for the hard work and dedication of the linemen during that time of emergency, the people who were truly grateful were the countless families who had their power restored in a timely manner.  Sitting in your house in the dark trying to find out if another tornado is on the way or wondering if the food in your refrigerator is going to spoil, and water is going to be restored is a frightening thought when your family is counting on you to make everything right.

Ticker tape parades are reserved for returning soldiers from victories.  Invitations to the White House are usually extended to dignitaries and distinguished individuals and basketball teams.  Statues are raised for heroes who have made their mark on the nation.  Pictures of our Founding Fathers are placed on our currency.  All of these are great ways to honor our heroes.

Power Plant Men and Linemen do not need this sort of gesture to know that what they do for mankind is a tremendous benefit to society.  If you would like to honor some great heroes of our day, then if you are ever travelling through Oklahoma and you see a bright orange truck travelling down the highway with an Electric Company Logo on it, then give them a honk and a wave.  They will know what you mean.  When they wave back, know that you have just been blessed by some of the greatest men and women of our generation.