Similar to these Sand Filters only somewhat bigger.  If you look closely at the outside of the tank, you can see where the three sections of the tank are divided.

These are the same tanks I was in when I was Sandblasting under the watchful eye of Curtis Love which was the topic of the post about “Power Plant Safety as Interpreted by Curtis Love“.  Before I was able to sandblast the bottom section of the sand filter tank, Ed Shiever and I had to remove all the teflon filter nozzles from the two middle sections of each tank.  Once sandblasted, the tank was painted, the nozzles were replaced and the sand filter was put back in operation.

Ed Shiever and I were the only two that were skinny enough and willing enough to crawl through the small entrance to the tanks.  The doorway as I mentioned in an earlier post is a 12-inch by 18-inch oval.  Just wide enough to get stuck.  So, I had to watch what I ate for lunch otherwise I could picture myself getting stuck in the small portal just like Winnie the Pooh after he had eaten all of Rabbits honey.

Ed Shiever was a janitor at the time, and was being loaned to the labor crew to work with me in the sand filter tank.  Ed was shorter than average and was a clean-cut respectable person that puts you in the mind of Audey Murphy, the most decorated soldier of World War II.

For those power plant men that know Ed Shiever, but haven’t ever put him and Audey Murphy together in their mind will be surprised and I’m sure agree with me that Ed Shiever looked strikingly similar to Audey Murphy at the time when we were in the sand filter tank (1983).

Before I explain what happened to Ed Shiever while we spent a couple of weeks holed up inside the sand filter tanks removing the hundreds of teflon nozzles and then replacing them, I first need to explain how I had come to this point in my life when Ed and I were in this echo chamber of a filter tank.  This is where Ann Bell comes into the story.  Or, as my friend Ben Cox and I referred to her as “Ramblin’ Ann”.

I met Ramblin’ Ann when I worked at The Bakery in Columbia Missouri while I was in my last year of college at the University of Missouri.  I was hired to work nights so that I could handle the drunks that wandered in from nearby bars at 2 a.m..  Just up the street from The Bakery were two other Colleges, Columbia College and Stephen’s College which were primarily girls schools.  Ramblin’ Ann attended Stephen’s College.

She had this uncanny knack of starting a sentence and never finishing it.  I don’t mean that she would stop halfway through the sentence.  No.  When Ann began the first sentence, it was just molded into any following sentences as if she not only removed the periods but also any commas and spaces between the words.

She spoke in a seemly exaggerated Kentucky accent (especially when she was talking about her accent, at which point her accent became even more pronounced).  She was from a small town in Kentucky and during the summers she worked in Mammoth Cave as a tour guide (this is an important part of this story… believe it or not).

The conversation could continue on indefinitely.  So, when my girlfriend who later became my wife came to visit from Seattle, I told her that she just had to go and see Ramblin’ Ann Bell, but that we had to tell her that we only have about 15 minutes, and then we have to go somewhere else because otherwise, we would be there all night nodding our heads every time we heard “…Know What I Mean?”

My roommate Barry Katz thought I was being inconsiderate one day when he walked in our dorm room and I was sitting at the desk doing my homework and occasionally I would say, “Uh Huh” without looking up or stopping my work, so after sitting there watching me for a minute he asked me what I was doing and I told him I was talking to Ann Bell and I pointed to the phone receiver sitting on the desk.

I could hear the “You Know What I Mean”s coming out of the receiver and each time I would say, “Uh Huh”.  So, when he told me that wasn’t nice, I picked up the receiver and I said to Ramblin’ Ann, “Hey Ann, Barry is here, would you like to talk to him?” and I handed it to him.

He sat down and asked Ann how she was doing…. 10 minutes or so and about 150 “Uh Huh”‘s later, Barry looked over at me and slowly started placing the receiver back on the desktop repeating “Uh Huh” every so many seconds. 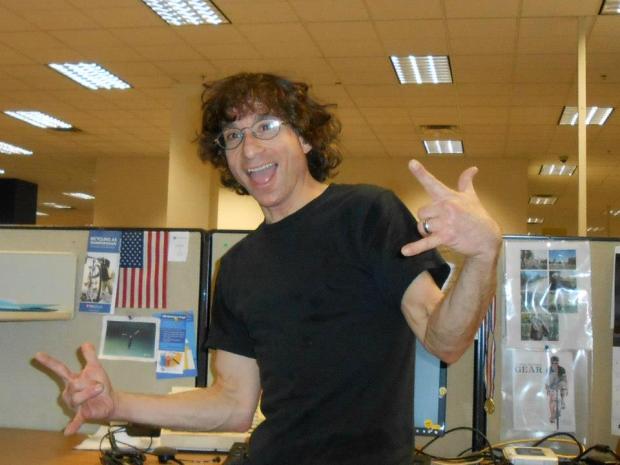 Anyway.  The reason I told you this story about Ramblin’ Ann was because after a while I began to imitate Ann.  I would start ramblin’ about something, and it was almost as if I couldn’t stop.

If you have ever read the story about Dr. Jekyll and Mr. Hyde, Dr. Jekyll would transform into Mr. Hyde by drinking a potion.  But eventually he started turning into Mr. Hyde randomly without having to drink the potion.  Well, that is what had happened to me.  In some situations, I would just start to ramble non-stop for as long as it takes to get it all out…  Which Ed Shiever found out was a very long time.

You see, Ed Shiever and I worked in the Sand filter tanks for an entire week removing the nozzles and another week putting them back in.  the entire time I was talking non-stop to him.  while he just worked away saying the occasional “uh huh” whenever I said, “you know what I mean?”, though I didn’t say it as much as Ramblin’ Ann did.  I could never match her prowess because my lung capacity just wasn’t as much.

Ed Shiever was a good sport though, and patiently tolerated me without asking to be dismissed back to be a janitor, or even to see the company Psychiatrist…. Well, we didn’t have a company psychiatrist at the time.

Thoughts about a Manchurian Candidate Conspiracy came to mind as we could imagine the voice of Ann Bell echoing through the cave as a very excited Ramblin’ Ann explained to Ronald Reagan how excited she was and how much this was going to mean to her in her life, and how she will think back on this time and remember how excited she was and how happy she will be to have those memories and how much she appreciated the opportunity to show Ronald Reagan around in Mammoth Cave… with all of this echoing and echoing and echoing….

We had watched this on the evening news and it was too late to call to warn the President of the United States not to go in the cave with Ann Bell, so we could only hope for the best.  Unfortunately, Ronald’s memory seemed to be getting worse by the day after his tour of Mammoth Cave and started having a confused look on his face as if he was still trying to parse out the echoes that were still bouncing in his head.

Of course, my wife and I felt like we were the only two people in the entire country that knew the full potential of what had happened.

So this started me thinking…  Poor Ed Shiever, one of the nicest people you could ever meet, had patiently listened to me rambling for two entire weeks in an echo chamber just like the President.  I wondered how much impact that encounter had on his sanity.  So, I went to Ed and I apologized to him one day for rambling so much while we were working in the Sand Filter tank, hoping that he would forgive me for messing up his future.

He said, “Sure, no problem.”  Just like that.  He was all right.  He hadn’t lost his memory or become confused, or even taken up rambling himself.  I breathed a sigh of relief.  Ed Shiever had shown his true character under such harsh conditions and duress.

I’m just as sure today as I was then that if Ed Shiever had been with Audey Murphy on the battlefield many years earlier, Ed would have been standing right alongside him all the way across the enemy lines.  In my book, Ed Shiever is one of the most decorated Power Plant Men still around at the Power Plant today (well, he has retired since I first wrote this).

I finally found an actual  picture of Ed Shiever: