I can’t say that the Coal-fired Power Plant located in the middle of the North Central Plains of Oklahoma had visitors on Halloween Night trick-or-treating looking for candy.  I have mentioned before that we had an evil plant manager when I first arrived as a summer help at the plant that did what he could to make life miserable for his employees.  That would sometimes send chills up your spine.

One time out of the blue when I was a summer help in 1980, the Plant Manager asked me in a suspiciously benevolent voice if I would stay after work to help him tend to his bees.  You see.  Eldon Waugh was a beekeeper.

Beekeeping is a noble profession, and I admire their ability to make a good thing out of a seemingly bad situation.  Sonny Karcher was a beekeeper.  Sonny was a Hero of Mine.

The plant grounds was a great place for bees because we had fields full of clover.  But Eldon and bees?  I have a slightly different take on it. Bees are industrious workers that are single-minded.  They each have their job, and they go about doing it.  They are willing to give their life for their hive and in that way, are sort of unsung heroes.  Or maybe bees do sing about their heroes and we just don’t know it.  Maybe their buzzing away is at times a lament for those who have worked their wings away to the point that they are no longer able to contribute.

Sort of reminds you of a Power Plant Man.

Since I was carpooling at the time and didn’t have my own car, Eldon said that he would drive me back to Stillwater and drop me off at the corner of Washington and Lakeview where I normally was let off, where I would walk up to the University Estates to where my parents lived (and still do – or did when I first wrote this post.  Now they live across the street from me in Round Rock, Texas  – new update in 2020 – my parents now live in New Hampshire).  So I went to Eldon’s office when I finished work that day, and I followed him down to his pickup truck.  We drove up by the coalyard where he had a trailer that had a bunch of white boxes lined up, which housed his beehives.

Beehives like this only lined up on a trailer

Eldon Waugh gave me a hood that beekeepers wear to keep the bees from finding out what the beekeeper really looks like so the bees don’t attack them later when they are flying by and realize that they are the person that keeps interrupting their beehive.

No. That’s not me. This is a picture I found on Google Images

Eldon explained to me that when a bee stings you, you don’t grab the stinger and pull it out because that injects the bee’s venom into your body when you squeeze it.  Instead you take a straight edge, like a knife or piece of thin cardboard or something similar and you scrape it off.

That’s when I realized that Eldon had only given me a hood.  He hadn’t given me a full beekeeper suit like I would see on TV or in the neighborhood when I was young and some beekeeper came to collect a swarm of bees that had settled in a tree across the street from our house.

Eldon proceeded to open the beehive boxes and inspect them.  He had me hold things while he was doing this.  He showed me things like how the Queen was kept in a smaller box inside the bigger one that kept it from leaving.  Somehow this reminded me of the ball of fire in the boiler that produced the steam that turns the turbine that makes the electricity at the plant.

When he went to open one box he told me that this particular box had bees that were more troublesome than the other bees, and they liked to sting.  “Ok.” I thought.  “Thanks for letting me know.”  Like that was going to help.

I had already resigned myself to the idea of being stung by a bee that was unhappy that the beekeeper had called an unscheduled inspection of the beehive when Eldon jumped back; Pulled off his hood and started batting around in the air.  Sure enough.  A bee had climbed up under his hood and had stung him on the back of the neck.

I took a key out of my pocket and scraped the stinger off as he whimpered and pointed to where the stinger was jabbing him.  The bee was on his collar making peace with his maker (because bees die after they sting you) as I wiped him away. Besides that one incident, the rest of the time went smoothly.  Eldon inspected his beehives.  It seemed like he was looking for mold or moisture or some such thing.  He was satisfied.  When we left he gave me a jar of his “Eldon Waugh” Honey that he used to sell at the Farmer’s Market in Stillwater.  Then he drove me back to Stillwater.

There was something surreal about this experience, and in a few days, I was compelled to write a poem about it.  This is not a poem about Beekeepers in General.  This is a poem about Eldon Waugh, the Beekeeper as I saw him.  I don’t know where I placed it, so I can’t quote it now, so I’ll remake it up the best I can.  You have to excuse me, because I am not a poet (as you could tell with the Bob Lillibridge Meets the Boiler Ghost story), so bear with me.  It is short:

Weaving honey for the hive.

Pouring life into their work,

Beekeeper gives shelter to be safe,

Benevolent ruler over all.

Sharing fields of flowers not of his making,

When time to pay the dues,

Beekeeper expects all to comply.

Sting him once and you will die.

Why is this a Halloween story?  I know I speak harshly of Eldon Waugh and I know that when he went home he had a family like everyone else.  I know that Bill Moler his assistant plant manager was the same way.  If you met him at Church or somewhere else, he would treat you with the dignity that you deserved.  Something happened to them when they drove through the plant gates (I felt), that made them think they were invulnerable and all powerful.  Like Mister Burns in the Simpsons (as I was reminded this week). 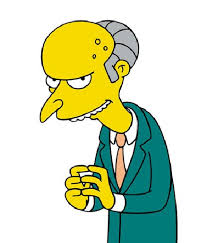 It was Lord Acton (John Emerich Edward Dalberg Acton) in a letter to Bishop Mandell Creighton in 1887 that said, “Power tends to corrupt, and absolute power corrupts absolutely. Great men are almost always bad men”.   At this particular power plant, because it was so far removed from Corporate Headquarters and any other Electric Company departments, the situation allowed the Plant Manager to be an absolute ruler.  There wasn’t anyone there to look out for the employees.

A union had come through when the power plant was first coming online trying to get the plant to vote to join the union.  Many employees had worked for unions before, and they preferred the tyranny of the evil plant manager over the stifling corruption of the union.

I remember the first summer I was at the plant (in 1979) when everyone was abuzz (notice the bee reference) about the union election.  Some people thought it would stop this “absolute power” syndrome infesting the two top dogs.  Those employees that had worked for unions warned the rest that to me sounded like joining a union was like selling their soul to the devil.  Some had even left their former employers to escape what they referred to as the “manipulation of their morals”.  It came down to voting for the lesser of two evils.

I would like to point out that Lord Acton said that Great men are almost “Always” bad.  There are exceptions.  There was one great liberating moment in Power Plant history at our plant that occurred in 1987 the day that our new plant manager arrived at our plant.  His name is Ron Kilman.

Ron called the maintenance department to a meeting to introduce himself to us in the main break room.  I remember that when he began speaking he told us a joke about himself.  I don’t recall the joke, but I do remember the reaction of the room.  I’m sure our reaction puzzled Ron, because we were all stunned.

I gave Charles Foster a look that said, “I didn’t know Plant Managers could joke!”  There must be some mistake.  No rattling of chains.  No “sacrifice your lives and families to provide honey for my table.”  Ron was a rather likable person.  It didn’t fit.  What was he doing as a Plant Manager?

Throughout the almost 7 years that Ron was the plant manager, we were free from the tyranny of the “Beekeeper”.  I have invited Ron to read my blog posts because he is one Plant Manger that even though he wasn’t one of the True Power Plant Men in the field showing their character daily by fighting dragons and saving fair maidens, he was our benevolent dictator that had the power to put his thumb down on the rest, but choosing “Might for Right” as King Arthur preferred.

When Ron first came to the plant, he really wanted to stay at the level of the regular working person. I believe that he meant it when he told us that.  As the years went by, the demands of managing the large plant occupied so much of his time that little time was left to spend with the people he cared about.

I remember him saying that his manager demanded him to be downtown in Corporate Headquarters so many days a week, and that left him little time at the plant. He asked me what I thought would be a solution to this problem.  Just asking someone like me, who was a nobody says something about Ron’s character.

I told him that I thought he should have a representative that would stay at the plant in his stead that would perform Plant activities and report to him directly.  Sort of as an extension of himself.  I was not thinking of his Assistant Plant Manager because he had his own job to do.

I was sometimes taken aback when Ron would ask a question like that because it surprised me that he valued my opinion. I will discuss Ron Kilman and why I believe that he is a man of great character in a later post.  I only mention him here to show the contrast between Eldon Waugh and Ron.  Both were in a position of ultimate power over their employees.  One took the high road, and one took the low.  Neither of them had ever been to Scotland as far as I know (ok.  I had to add another rhyme…  geez).

I also titled this post as a “Halloween Election” story.  I told you the scary part… that was the story about the beekeeper, in case you forgot to be frightened by it.  I also threw in the part about the Union Election as a meager attempt to rid the plant of total managerial tyranny.  But the real reason I made this a story about an Election is because of the striking similarity between Ron Kilman and Mitt Romney. My Gosh!  Have any of you noticed this?  Am I the only one that sees the resemblance?  Notice the chin, the hairline and even the gray side burns. 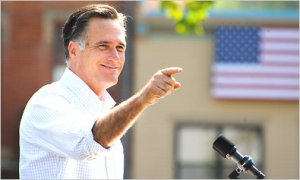 Happy Halloween, and good luck with the next election.