Angel of Death Passes by the Precipitator Door

Either this was the luckiest day of my life, or a day where stupidity seemed to be my natural state of mind. This particular day occurred sometime during September 1983. The Main Power transformer for Unit 1 had shut down because of an internal fault during an exceptionally hot day during the summer and was being replaced.

While the unit was offline, while I was on the labor crew, I was asked to help out the electricians who were doing an overhaul on the Precipitator. The Precipitator takes the ash out of the boiler exhaust before it goes up the smokestack. Without it, you would see thick smoke, instead, you see only clear exhaust. At the time the electricians I worked with were Sonny Kendrick and Bill Rivers. I had already applied for a job in the electric shop and was waiting to see if I was going to be offered the job. This gave me the chance to show the electricians what a brilliant worker I was.

Bill Rivers told me to go in the precipitator and wipe down the insulators that held the wire racks in place. He showed me where they were. I wore a regular half-face respirator because the fly ash is harmful to inhale.

Just before I went in the precipitator door to begin wiping down the insulators using a Scotch Brite Pad, Bill Rivers pointed to my flashlight and said, “Don’t drop your flashlight in a hopper otherwise you will have to make sure that you get it out of the hopper before we go back online.” I told him I would be sure to hold onto my flashlight (noticing that Bill had a string tied to his flashlight which was slung over his shoulder) and I entered the precipitator door. 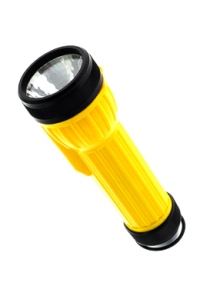 The inside of the precipitator was dark. 70 foot tall plates are lined up 9 inches apart. Wires hang down between the plates and when the precipitator is turned on, the wires are charged up to around 45,000 volts of electricity. The wires each have a 30 pound weight on the bottom to keep the wires straight, and the wires are kept apart and lined up by a rack at the bottom. One end of the rack which is about 25 feet long is held in place by an electrical insulator about 3 feet long. This is what I was supposed to clean. The light from the flashlight lit up the area around me because everything was covered with the fine white powder reflecting the light. 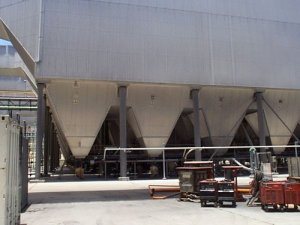 Fly Ash Hoppers. Our hoppers were 12 foot by 12 foot at the top.

I sat there for a minute in the dark as my eyes grew accustomed to the small amount of light that was coming through the doors. After I could see again, I reached my hand into the ash to feel for my flashlight. The ash was very fluffy and there was little or no resistance as I flailed my hand around searching for it. I leaned over farther and farther to reach down deeper into the ash. I was at the point where I was laying down flat on the ledge trying to find the flashlight, and it was no where to be found.

I pulled myself over to the side edge of the hopper and dropped myself down into the ash so that I could reach over where I had dropped the light, but I was still not able to find it. At that point, I was leaning out into the hopper with only my one index finger gripping the ledge around the hopper (read that again…. one index finger was holding me up). I had a decision to make… I thought I would just bail off into the ash to see if I could find the flashlight, or I could give up and go tell Bill Rivers that I had done the one thing that he told me not to do, and in record time.

I don’t usually like to give up until I have exhausted every effort, so here was my dilemma. Do I let go and dive into this ash to retrieve my flashlight? Or do I leave the hopper and go tell Bill? I regretfully decided to go tell Bill. So, I climbed up out of the hopper, with my clothes covered with Ash (as we did not have fly ash suits at the time and I was wearing my coveralls). I made my way to the precipitator door and once I was outside, I determined which hopper I had been in when I dropped my flashlight.

I found Bill and told him that I had dropped my flashlight in a hopper full of ash. He told me to get the key for that hopper and open the door at the bottom and see if I could find the flashlight. Unlike the picture of the hoppers above, we had a landing around the base of the hoppers by the access door so you didn’t need a ladder to reach them.

Curtis Love had been watching the door of the precipitator for me while I was supposed to be wiping off the insulators. He came down with me, and we proceeded to open the access door at the bottom on the side of the hopper. When I opened the door both Curtis and I were swept backward as a stream of warm fly ash shot from the door. The ash fell through the grating to the ground below. We regained our footing and watched as a tremendous pile of ash grew below us. If the flashlight had come out of the doorway, it would have remained on the landing since it was too big to go through the grating, but it never came out.

So, in my infinite wisdom, I asked Curtis Love to hold onto my legs as I lowered myself down to the throat at the bottom of the hopper. I lowered myself down until I had half of my face laying in the ash. At this point only one of the two filters on my respirator was able to function as the other one was down in the ash. I reached my hand into the top of the feeder at the bottom of the hopper and with my finger tips I could just feel the flashlight. I had reached as far as I could, but I couldn’t reach far enough to grip the flashlight.

All of the sudden my head dipped down into the ash and my hand went around the flashlight. I was not able to breathe as my respirator (and my entire head) was completely immersed in ash. Everything went dark. I struggled to get up, as Curtis had let go of my legs and I had plunged head first into the bottom of the hopper.

I had one hand free as the other one held the flashlight. I used it to push against the opposite wall of the hopper to raise my head up out of the ash. I still couldn’t breathe as my respirator was now clogged solid with ash. When I tried to inhale, the respirator just gripped my face tighter. Finally with my one free hand pushing against the hopper wall to hold my head out of the ash, I reached up with the hand that held the flashlight and pushed against my respirator enough to break the seal around my face so that I was able to get a breath of air.

Then I quickly pulled myself out of the precipitator as I heard Curtis saying the mantra that I had heard one other time (as I indicated in the post about Power Plant Safety as Interpreted by Curtis Love). He was saying over and over again, “I’mSorry,I’mSorry, KevinI’mSorry, ThoseGuysWereTicklingMe. I’mSorry,IDidn’tMeanToLetGo,ITriedToHoldOn, butThoseGuysWereTicklingMe.”

Looking around I spied a few Labor Crew hands sneaking away. As this happened before when I was sandblasting in the sand filter tank when Curtis Love had turned off my air, this wasn’t the first encounter I had with Power Plant Men In-Training playing a Power Plant joke on me. I told Curtis to forget it. I had retrieved my flashlight and everything was all right. I was covered from head-to-toe with fly ash, but that washes off pretty easily.

While I was hanging on the edge of the hopper with only the tip of my index finger gripping the ledge, I was actually considering letting go. There never would have been an electrician at the power Plant named Kevin Breazile. I never would have married my wife Kelly, and had my two children Elizabeth and Anthony. I would not be writing this story right now. If it had been left to my own stupidity, none of those things would have happened.

I believe it was my guardian angel that had talked me out of letting go (or had actually been standing on my finger). As stubborn as I was, and against my nature, that day I had decided to give up searching for my flashlight and seek help. That one momentary decision has made all the difference in my life.

Since that day I have had a certain appreciation for the things that happen to me even when they seem difficult at the time. I have lived a fairly stress-free life because each day is a gift. Currently I work in a stress-filled job where individual accomplishments are seldom rewarded. From one day to the next I may be laid off at any time. I still find a lot of satisfaction in what I do because it was possible that it never would have happened. I have been kept alive for a purpose so I might as well enjoy the ride.

I find a special love for the people I work with today, because they are all gifts to me. I try to pay them back with kindness… when that doesn’t work.. I try to annoy them with my presence… Just to say….. — I am still here!