From Power Plant Rags To Riches

There is one item that all Oklahoma power plant men carry with them almost every day.  Whether they are electricians working on a motor, a mechanic pulling a pump, or an operator making his rounds.  All of them carry and use this one item.  It is so important that, without it, it would be difficult for the maintenance shop to function properly.

This item of course is a rag from the Chief Wiping Cloth Rag Box:

As an electrician, I used rags all the time.  Whether I was working on a breaker, doing battery inspection, elevator maintenance or just looking for a clean place to sit my back side, I had to have a rag from the box of Chief Wiping Cloths.  Chief Wiping Cloths come from the Oklahoma Waste & Wiping Rag Company in Oklahoma City.

When I was on the labor crew, I dirty all the time.  I was doing coal clean-up, digging ditches, pouring concrete, shoveling bottom ash and wading through fly ash.  I had little reason to stay clean or to clean things.  My life was full of dirt and grime.  I was always dirty, so much so that when I went into the electric shop in 1983 and Bill Bennett was talking to Charles Foster about who should repair the Manhole pump motors, Bill told Charles, “Let Kevin do it.  He enjoys getting dirty.”

I didn’t argue with Bill, because, well…. what was the point.  But as an electrician, I not only had desired to have a cleaner job, but I also wished to fulfill Jerry Mitchell’s prophesy that “When I become as good as him, I will be able to remain clean even in the face of “Coal Dust and Fly Ash” (See the post A Power Plant Man Becomes an Unlikely Saint).  The boxes of rags were my opportunity.

So, when I left to go on a job, I would always grab at least a couple of rags from the box and put them in my tool bucket and at least one hanging out of my back pocket.  That way, if I needed to plop down on the ground to unwire a motor too low to sit on my bucket, I could sit on a rag on the coal dust covered ground instead.  This helped my goal of remaining as clean as possible.

It’s funny that years later I should miss the boxes of rags that I used to use to do my job.  There was more to it than just the rags I used to wipe my hands, battery posts, greasy bearings, breaker parts and my nose.  You see, these rags were made from recycled clothes.  Yes.  They were sterilized for our use, but these were from recycled clothes.

Actually, the Oklahoma Waste and Wiping Rag Company, founded in 1940, was one of the largest purchasers of donated clothing in the country.  That meant that many of the rags we used in the rag box were actually worn by someone.  Sure, a lot of the rags came from defective clothing from factories, but some of the rags had been clothes actually worn by a person.

As odd as it may sound, while I was grabbing rags from the rag box, I was thinking (at times… it wasn’t like it was an obsession with me), that these rags may have been worn by someone for years before ending up covered with bearing grease by my hand and tossed into a proper Fire protection trash can. 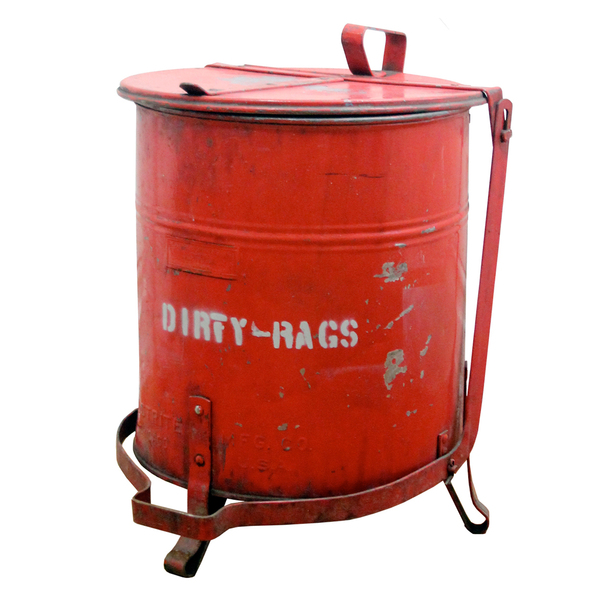 So, anyway….. Thinking about how these rags were possibly once worn by people throughout the United States, I felt that some of the rags had a specific connection to some unknown person somewhere.  So, I would actually go through the rag box looking for pieces of rags that I felt had been worn by someone before.  You know (or maybe you don’t), rags that had an aura around them like someone had once had a “personal relationship” with them.

I would take these rags and I would “pseudo-dress up” in them.  So, if it was a rag made out of a pair of pants, I would tuck it in my belt and I would carry it that way until I needed it.  In a weird way (and I know… you are thinking a “really weird” way), I would feel connected to the person that had worn this piece of clothing in the past.  I felt as if I was honoring their piece of cloth just one last time before I stained it with coal dust, fly ash, or snot, just one last time.

And in my even weirder way, I would sort of pray for that person, whoever they may be.  I would even, kind of, thank them for the use of their old clothes (I know, I stretched the English Language in those last two sentences to meet my unusual need).

I have a picture in my mind of myself standing on the platform of the 6A Forced Draft Fan at Muskogee in the fall of 1984 (one year after becoming an electrician), dressing myself up in pieces of clothing from the rag box, all giddy because I had found enough pieces to make an entire outfit made of half male and half female clothing.  Ben Davis, who was on overhaul at Muskogee with me from our plant is shaking his head in disbelief that he had to work with such a goof.  Not exactly sure who he has been assigned to work with… — I actually felt sorry for Ben.  I knew I was a normal person.  The trouble was… I was the only person that knew it.

Levity is healthy.  And at times when stress is at its greatest, levity is a way back to sanity.  Just today I was invited to a conference call to discuss something that I was working on, and when I was done, I stayed on the line even though I was no longer needed.  As I listened, one  person on the other end was remarking about how he enjoyed his team so much because they were able to crack up and reduce the stress by being humorous.

A friend of mine, and fellow teammate Don McClure  who had invited me to the call was coming up with one “one-liner” after the other.  They were “spot-on” and very funny (as he usually is — ok.  He’s going to correct me on the “usually” part).  But he said one thing that hit home with me.  He said that he had been in the Hot-seat so long that he had to put on a  pair of Asbestos underwear.

This, of course, made me immediately think of the asbestos gloves we used to wear in the electric shop before Asbestos had been formerly outlawed.  We had an old pair of asbestos gloves from Osage Plant ( to find out more about the Osage Plant read about it in the post Pioneers Of Power Plant Fame Finally Find Peace).

Along with the rags in the rag box, when I used to put on the asbestos gloves I used to think of Howard Chumbley (who died on August 4, 1998 at the age of 70), at the age of 24 working at the Osage Plant, before his hair turned to gray and then to white, wearing these same gloves while he pulled a bearing off of a heater and slapped it onto a motor shaft. 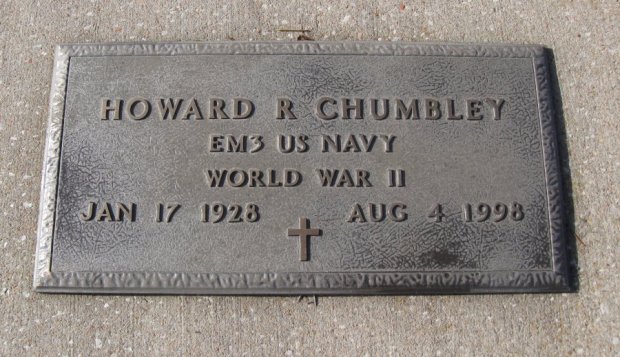 It gave a special meaning to motor repair.  Even though Howard retired from plant life in 1985, for years I could put on his old pair of asbestos gloves and feel like I was stepping into his young shoes.  I would think… If only I could be a true “Power Plant Man” like Howard….   I love Howard with all my heart, and today, I have never met a better human being than him.

Note that in the picture of Howard’s gravestone it says that he was an EM3 in the Navy.  This is an “Electrician’s Mate 3rd Class”.  There is no way I was ever going to measure up to Howard.  He was a hero to his country and a man of great integrity and humility.  If I had saved up all the nice things I had done in my life and done them all on one day, I may have slightly resembled Howard on a regular day.  Just like Jim Waller that I had discussed in my last post… Only Men of the greatest integrity measure up to be “True Power Plant Men”.

This made changing the bearings on a motor almost a sacred event to me.  I don’t know if the other electricians felt what I felt, but there was something about placing those gloves on my hands that seemed to transform me for a moment into someone noble.  I never mentioned it to them (which was odd, because I was usually in the habit of telling them every little crazy thought that entered my head).

I remember at break time one day Margie Belongia (who was a plant janitor at the time) telling me in 1981 when I was a summer help, that she wanted to go to hell because that was where all of her friends would be.  I asked her at the time how she was so certain that being in hell guaranteed that she would be able to be with her friends, and she was taken aback by my question.  “What do you mean?  Why wouldn’t I be with my friend?” — I responded, “Suppose in hell you are alone.  With no one but yourself.”  I think I unnerved her by my response. She said that she had never considered that.  She had counted on being with her friends.  They had all decided that was the way it was going to be.

At any rate.  I kept her thought in my mind.  I hope every day that someday I will be able to walk up behind Howard Chumbley (not in hell of course) and just stand there and listen to him tell stories about when he worked at the old Osage Plant, and how he used to be up to his elbows in oil that contained PCBs and never thought twice about it.  Or how he played a harmless joke on someone dear to him, and he would laugh….

Howard was my foreman for only about 5 months before he retired.  I remember sitting in the electric shop office for a year and a half during lunch listening to him tell his stories.  He would grin like Andy Griffith and laugh in such a genuine way that you knew that his heart was as pure as his manners.

Andy Griffith in this picture reminds me of Howard Chumbley

To this day I know that I have never been richer than I was when I was able to sit in the shop and listen to Howard Chumbley pass on his life experience to us.  Even years later when I was able to slip on the pair of Asbestos Gloves worn by him years earlier I could feel that I was following in his footsteps.  Just the thought of that would make me proud to be an Electrician in a Power Plant.

I used to imagine that the Chief on the Chief rag boxes knew the history of all the pieces of rags in the box.  When I moved to Texas in 2001, I used some sturdy Chief rag boxes when I was packing to leave.  They are sturdy boxes.  Just this past year, we threw away the last Chief rag box that contained Christmas decorations in exchange for plastic tubs. Even though it seems like a little thing.  I miss seeing the Chief on those boxes of rags. 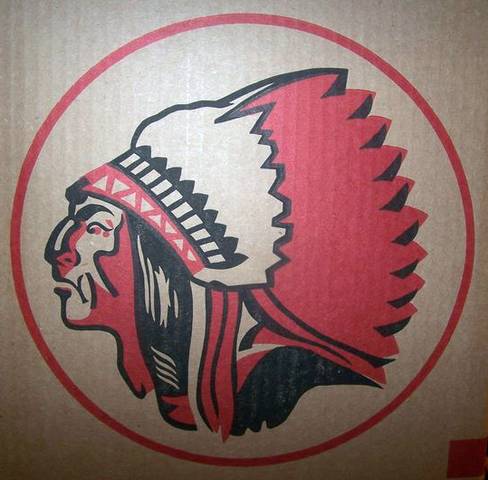 The chief on the Chief Rag Boxes