Power Plant Men Taking the Temperature Down by the River

The Power Plant sits on a hill where you can see it 20 miles away looming in the distance.  The lake that provides cooling water for the plant is also built on a hill.  If the Electric Company had waited for the rain to fill up the lake we would still be waiting 33 years later.  Fortunately the Arkansas River flows near the plant below the Kaw Lake dam near Ponca City and before it runs into the Keystone Lake near Tulsa.  There are 4 large pumps alongside the river in a fenced in area that draws water from the river and sends it a mile up a hill where it pours into the lake.  It is a beautiful lake and most of the area around the lake is a wildlife preserve.  A part of the area around the lake is reserved for hunting.

Bald Eagles and Pelicans make this lake their home in the winter.  During the winter months you can watch a web cam of a bald eagle’s nest on the lake.  http://www.suttoncenter.org/pages/live_eagle_camera

I have included this map so that you can see the layout.  the wide blue line in the upper right corner is the Arkansas river.

Map of the Power Plant Lake

The River Pump station is off the edge of this map.

During my second summer as a summer help at the Power Plant I was assigned to be the “gopher” for a maintenance crew that was going to be working down by the river for a week.  Being a “gopher” means that you drive back and forth between the plant and the river bringing (in other words: “go for”) tools, supplies, food, water, and anything else that the Power Plant Men may need while they were working at the river.

At first I wasn’t aware of what job the Power Plant Men crew were assigned.  I just knew it was down by the river.  I towed a large air compressor behind the flatbed truck and a lot of air hoses and air powered tools.  Then I watched as the men began to setup the equipment.  At one point Ray Butler who was overseeing the job asked me to go back to the plant and get a Y-connector for the air hoses and some more hose. 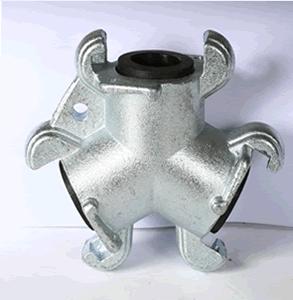 I drove back to the plant and when I returned I was standing there with the coupling in my hand watching the men dragging air hoses down into the river, someone asked me to help them move something.  So I laid the Y-connector on the top of the Air Compressor.  Thinking that would be a safe out of the way place for it.  When I did that, it fell down into a cavity that was about 6 inches wide and 5 feet deep where there was the air intake for the compressor.  It was too deep to reach it.  You can see the air intake section on the front of this air compressor:

This is the exact size and type of air compressor

After trying to figure out how to take off the front grill of the compressor to retrieve the connector and not seeing an easy way, I told Dale Hull what I had done.  He just smiled (well… Dale Hull had a perpetual smile or grin on his face anyway), and he went over to a tool box and pulled out a spool of wire.  After cutting some off and fashioning a hook on the end, he quickly snagged the connector and pulled it right out.  Honestly when I saw him start fishing for that coupling I thought to myself that this wasn’t going to work and I was resigned to driving back to the plant again for another one.  It’s too hard to hook something that far down with that flimsy wire.  I was surprised and relieved when he quickly pulled it out with little effort.  Maybe he had a lot of practice doing this.  In True Power Plant Man fashion, there was no ridicule.  From the moment I told him I had dropped the connector, he went to work as if it was his job, not doing anything to attract attention.  Until this moment, Dale Hull and I were the only two that knew that I had dropped that connector into the compressor housing.  Even though I already had, I marked him down again in my book as a True Power Plant man.

Dale Hull was one of those surprise mechanics that had a lot more skill than you would think by looking at him.  He reminded me of John Ritter.  The actor on “Three’s Company”.  I carpooled with him a lot during the first and second summer and one thing that stood out in my mind was that he had over 100,000 miles on his car and still had the original tires.  He did his own wheel alignments.  I spent many hours alongside Dale on weekends doing coal cleanup.  I helped him move one time from one apartment to the other.  I remember that he had his own set of precision machining tools.

When I carpooled with him and Ricky Daniels, we would go to the gas station just north of the plant where Dale and Ricky would purchase some beer to drink on the way home.  At this time, the place was crowded with construction hands that were still building the plant.  I would sit in the back seat and watch the back of the heads of Ricky and Dale who, after a long hot day at work were relaxing by drinking beer and trying to stay awake until they reached Stillwater.  I would see Dale’s head bobbing up and down as he would struggle to stay awake.  Every day it was the same.  We always made it safely home.  I don’t know if it was the Novena to St. Jude that I was saying in the back seat or it was Dale’s ability to drive while nodding off to sleep or both.

Anyway.  Back to the river.

In the river just below the surface of the water next to the River Pump Forebay there are 4 “coffin houses” where the water can flow into the pump forebay where it is then pumped up to the lake.  The 4 coffin houses (which get their name because they are rectangular shaped boxes that put you in mind of coffins) are mounted on one large concrete slab.  The Power Plant Men were setting everything up so that they could drill holes in the concrete slab which was about 4 feet under water.

Why were they drilling holes in the concrete slab?  According to the EPA, it was required that the Electric Company continuously monitor the temperature of the water in the river at the point where the water enters the intake into the forebay area (As if the electric company was somehow going to be able to change the temperature of the water). So they were mounting a thermometer out in the middle on the concrete slab at the bottom of the river.

Hence the use of Air powered tools.  🙂  It wouldn’t have worked well with electric tools.  I remember Power Plant He-men like Bill Gibson standing out in the river (the water had been lowered by lowering the output of Kaw Dam about 20 miles upstream) taking a deep breath, and dropping down into the water.  A few moments later a rush of bubbles would come blasting out of the water as he operated the air operated power drill.  Each time someone went under the water, they had to find the hole they were drilling, put the bit back in it, and try to drill some more of the hole all while holding their breath.  A lot of times they came up laughing because once they started drilling they couldn’t see anything because bubbles were flying in their face.  Needless to say, the 10 or so holes they had to drill took almost an entire week.

Of course, they had to take time out for cookouts and swimming in the river.  Fortunately there were no Power Plant Women down there at the time, because when it came time for lunch, a group of men in nothing but their skivvies would take a dip in the river.

When they were through there was a thermocouple mounted at the bottom of the river with a cable that led up the bank and into a small galvanized metal building that housed a recorder that took one month to make a full revolution recording the temperature of the water.

There was one other time when I worked for a week at the river.  It was when I was on labor crew and we had to shovel the sand out of the river pump forebay.  This is a concrete pit about 30 feet deep.  Animals would fall in there from time to time and drown, so usually there was usually a rotting dead possum and a dead bird or two floating in the murky water when the pumps weren’t running.

A P&H crane would lower a large bucket into the pit and a couple of us would shovel sand into it until it was full, then the crane would take it up and dump it out, then lower it back down again for some more sand.  We would be standing in the water or on a pile of sand shoveling sand all day.  I remember my first day doing that, after a while I looked down to see that there were little tiny bugs crawling all over under the hair on my arms.  I called them weevils because they weeved around the hairs on my arms.  I quickly realized that my entire body was covered with these little crawling bugs.  They really weren’t weevils, because those are much bigger than the tiny bugs that were crawling all over me.    They put me in the mind of flea larva.

My first reaction was to panic, run around in circles screaming like a little girl.  Instead I resigned myself to these bugs and just kept on working. They weren’t biting me.  I think they were just looking for a way out of the pit.  You climbed in and out of the pit using a ladder permanently mounted on the concrete wall.  When it was lunch time I would take a dip in the river, clothes and all to wash them all off.

It’s a  funny thought now to think that after I became an electrician a trip to the river pumps always felt like a vacation.  Maybe because we were outside of the normal plant grounds.  There usually weren’t any supervisors around.  There was wildlife.  There was a river you could play in if you felt the need.  I never found myself working less while I was there, it just seemed enjoyable to have a change in scenery.

Anyway.  I don’t think the EPA every really cared what the temperature of the river was, they just wanted us to go through the exercise of measuring it.  But that is how that lake ended up on the top of that hill.  The water is used to cool the steam in the condenser in the Power Plant.  The fish and the birds also enjoy it and all the wildlife around the lake.  All made possible by the diligent maintenance of the Power Plant Men.