Singing Along With Sonny Kendrick

Today I sit quietly in a cubicle with a group of other people on my team.  We each type away throughout the day, or we are on calls in our own meetings listening to conversations where we offer input where it is necessary.  I may listen to music on my computer to help me get into the rhythm of my work as I type away creating documents or sending IMs to other employees as they ask me questions throughout the day.

That was not how it was before the PC made inroads into our lives.  We used to sit around and talk to each other.  We did things to pass the time while we worked on tedious jobs.  We talked about our families.  We talked about movies and shows we had seen.  We asked each other how their family was doing.  Sometimes, we even sang.

The day was growing long, and Sonny had taken over for me and was installing the second circuit board while I was sitting on a Tension house box  where Sonny had previously been sitting.  Suddenly I felt this sudden urge to burst out in song.  It was not known before this moment that I was sort of a professional singer.  Actually.  I had grown up with a family of singers.

So, I just let loose singing one of my favorite songs.  It didn’t matter that there wasn’t an accompaniment.  I didn’t need the orchestra behind me on the radio to help me keep time.  I had the orchestra playing in my mind….  I didn’t need the tuning fork that Sister Maureen used to use at Catholic School when I was kid as she would bang it on the desk and then hum with a wavering hum until it came in tune with her tuning fork.  No.  The tuning fork came from years of listening to my favorite songs.

So, I burst out with one of my favorite songs and started to serenade my new found friend, Sonny Kendrick.  I began quietly and worked my way up to a crescendo.  The song I sang began thus:   “Here’s the story of a lovely lady, who was bringing up three very lovely girls….”

I continued with  great confidence in my singing ability, knowing that I was impressing my fellow electrician with my fantastic singing ability:  “all of them had hair of gold, like their mother….the youngest one in curls!”   Even louder I bellowed out:  “Here’s the story of a man named Brady who was living with three boys of his own.  They were four men living all together, yet they were all alone!”

Now I was in full form  with my hand on my chest, standing at attention with all the full emotion I could draw out as I sang the final verse:  “Till the one day when the lady met this fellow.  And they knew that it was much more than a hunch, That this group must somehow form a family, That’s the way we all became the Brady bunch!”

Then as if I was playing an air guitar on stage, I was able to dramatically complete my short opera with the shaking of my head as I sang the final words:  “The Brady bunch, the Brady bunch.  That’s the way we became the Brady bunch bunch bunch…..”  (now you know the second place where you could hear a song over and over).

Acting rather proud of my accomplishment I relieved Sonny as I was going to install the third of the four Rapper cards in the cabinet….  I began connecting the wires to the circuit board one at a time when all of the sudden I was struck with some strange form of electricity!

Had we forgotten to turn off the electrical disconnect to the 480 Volts to the cabinet?  My fingers were shaking from the sudden impulse of electricity.  My knees were buckling so that I stumbled back and sat against rappers behind me.  I was completely stunned.  I couldn’t tell if my ears were actually picking up sound or I had suddenly died and was on my way to heaven because I had just electrocuted myself in the cabinet.

My head was spinning.  Thoughts entered my head like, “Great.  I have just been electrocuted!  I have only been an electrician for less than a month and already I have killed myself.   I hope my parents and my girlfriend don’t think I suffered when I died.”

Gradually, I realized that the sounds of harps and the humming of angels were all just an accompaniment that were being added by heaven itself to the song that was emanating  from Sonny Kendrick!  Sonny Kendrick, while he was taking his repose while I had proceeded to install my circuit board had suddenly had a similar urge to break out into song.

Only, unlike my feeble attempt at doing justice to the Brady Bunch Song, Sonny Kendrick was singing as if God himself had come down and suddenly transformed him into an Opera Singer.  I couldn’t tell if he was singing something from Wagner’s immortal Opera “The Ring” or if he was singing La Boheme by Luigi Illica and Giuseppe Giacosa.

It didn’t matter to me.  All I could do was sit there on a tension house in stunned amazement.  Tears were rolling down my face. Here was a guy that people referred to as Baby Huey because of his build ( I guess): 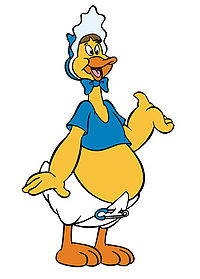 This is Baby Huey.  I didn’t really get the connection.

Suddenly his lower build had moved up to the chest area and Sonny Kendrick had transformed into Franklin Floyd Kendrick!  The magnificent opera singer!

When my friend and sudden Opera singing hero had finished, he stepped over the conduits and went to work to add the last rapper circuit board on the rack with the other three.

Still sitting on the tension house coming to my senses.   Realizing that my transformation to heaven was only a temporary visit.  I asked Sonny…. “What was that?”  — That was all I could think of saying.  What else could I say?  “Can I have your Autograph?”  I suppose I could have said that.  No.  All I could say was, “What was that?” 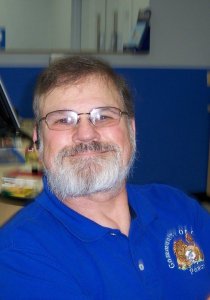 Sonny as he is today

Here is a picture of Sonny.  He didn’t have a beard then, but he has the exact same smile today that he had that day!  He gave me this exact same smile when I asked him “What was that?”  Exactly!

I said, “Sonny.  What are you doing here?  Why are you an electrician when you have a voice like that?”  He replied by telling me that he had a family and he had to provide for them and he couldn’t do it by being a singer.  So I asked him how he became an electrician.

You see.  At the time, Sonny had the distinction of being the Electrical Specialist.  He was the only one.  He had gone to Oklahoma State Tech in Okmulgee and received a technical degree there in electronics.  This gave him the ability to become the electrical specialist at the plant.

His real dream was to become an Opera Singer.  Being an electrician was something to pay the bills.  His heart was in his song.  Sonny has a tremendous heart.  I know.  I have seen and heard it beating.

There is a part of Sonny’s story that is a tragedy.  Isn’t that usually true with great artists?  I suppose that is where their passion for their creativity comes from.  This was true with Sonny, and in the next few months, I learned more and more about the burden that had been put on Sonny’s shoulders.

In order to understand what this means… you have to understand the conditions someone has to work in when they work on the precipitator…   First of all.  No one wants to work with you, because it means working in the midst of pigeon dung, fly ash, and dust.  Along with that, when the unit is online, the roof of the precipitator is one of the loudest places at the plant.  Rappers and Vibrators going off constantly.  Buzzing and Banging!  Very hot in the summer and freezing in the winter.

As time went by, and Bill Rivers and Sonny filled in the blanks I came to understand just how burned out Sonny Kendrick was with working on the precipitator.  I could see how he literally had to drag himself to the precipitator roof to work on the cabinets or fix a transformer knife switch.  He would rather being doing anything else.

It had occurred to me at the time that the units had only been online for about 3 and 4 years and Sonny was already completely burned out on this job.   It made perfect sense to me when I understood that this was a punishment for trying to stand up to an Old School Power Plant Supervisor.  In order to understand Leroy Godfrey read the post:

A little less than two years later, Sonny Kendrick sang at my wedding.  He was up in the balcony singing a list of songs that had been given to him by my mom.  Bill Moler, the Evil Assistant Plant Manager who was serving as a Deacon at my wedding came in the front door dressed in his robes and ready to go into the church.  I was standing there greeting people as they came in.

Bill suddenly stopped and stood still for a moment.  Then he said, “Who is that singing?  Where did you find someone with such a wonderful voice?”  I proudly told him, “That’s Sonny.”   Bill leaned forward and said, “Our Sonny?”   I replied, “Yep.  Sonny Kendrick.  Our Sonny Kendrick.”

I had decided early on that I was going to do whatever I could to pull Sonny off of that Precipitator so that he could use his talents as they were meant to be used.  So, every time I was asked to help out on the precipitator, I was glad to help Sonny.

Years later, when Sonny was finally able to be free of the precipitator, he went kicking and screaming, because I had turned precipitator maintenance on it’s head and it was hard for Sonny to see his work all turned topsy turvy.  I knew that like myself, Sonny had a personal relationship with his work and that when someone else was tinkering with it it was a kind of “insult”.

I knew for Sonny it was best.  It didn’t take him long to step out into the open air and take a deep breathe.  Once he realized it was no longer his worry, he was a much happier man.  I am pleased to see that Sonny Kendrick today wears the same smile that he did that day when he had broken out in song and serenaded me on top of the Precipitator.

It means that he still has the peace that he is due.  I can’t help it.  I have to end this post by posting his picture again.  Just look into his eyes and see his joy.  I’ll bet this picture was taken just after he had finished an aria of La Traviata by Guiseppe Verdi:

Sonny after gracing the world with an Aria

In a way.  Sonny’s life has been a Aria.  I have been blessed to  have been able to call him “Friend”.